Hindmarch is surely London fashion’s greatest impresario, making a mountain out of the portable version of a molehill. 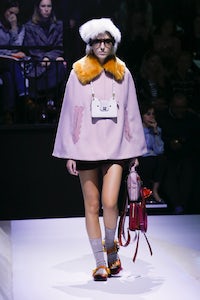 Hindmarch is surely London fashion’s greatest impresario, making a mountain out of the portable version of a molehill.

LONDON, United Kingdom — Working with her usual collaborators, INCA Productions, Anya Hindmarch once again created a huge spectacle to animate her collection of accessories. On Sunday morning, INCA raised a snow-covered mountain-top on the biggest steel deck ever used in a fashion show. (So big, in fact, that it obliterated all mobile signals in its immediate vicinity.)

This was all so that Hindmarch could invoke “a world of winter,” an Alpine paradise that rooted her brand somewhere more folkloric than the high-tech contexts she’s offered in seasons past. It’s not strictly true to distil Hindmarch’s offering to accessories — there were also ski sweaters, cableknit playsuits and degradé fox stoles — but she herself defined her major areas of interest as “shoes, bags and coats”.

The shoes embraced diamante-ed clogs and lambskin slippers. The outerwear ranged from sheepskin-collared capes to a trench decorated with folkloric hearts and bugs. And the bags? Well, the meat of the Hindmarch sandwich offered innovations as artful as her latest variation on the Stack bag whose compartments could be unzipped and reconfigured as a backpack or a handbag.

The designer pointed out that her Circulus pieces involve almost no stitching at all, making them one of the most old-fashioned forms of craft. This was one of the things that had drawn her to Scandinavian traditions of hand-woven leatherwork. But while it was obvious on Sunday that a huge amount of creativity and technical aptitude goes into Hindmarch’s presentations, one consideration nagged: what exactly was being sold? There wasn’t a broad enough spectrum of any one element to suggest a complete business model, bags aside. Bearing that in mind, Hindmarch is surely London fashion’s greatest showman, literally making a mountain out of the portable version of a molehill.