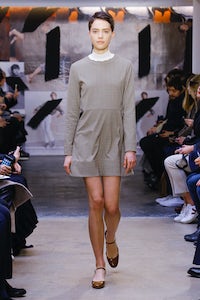 PARIS, France — Jean Touitou had a story to tell about his dealings with the Fédération de la haute couture et de la Mode, the governing body of the French fashion industry. When he approached them to show during Fashion Week in Paris, he was told, “We love you but what you do is clothes, and we want to have dreams.” That kind of reductive attitude has been the bane of Touitou’s life in fashion. “I might have a different way to dream,” he said after his latest show. “I don’t have a problem with other people expressing themselves in different ways.”

Besides, he insisted, “there is a huge, advanced fashion statement in what we do. It’s just not fashion in a way people understand it.” Really? His collection had a strong narrative coherence. Whether turtlenecked or buttoned up, the look was sharp as a tack. It made me think Nouvelle Vague one moment, and New Wave the next (somewhere between Paris in the Early Sixties and London in the late Seventies, in other words). And maybe that somewhere was the floral floor-sweepers which came in between. Which just goes to show how wise Touitou is to be impatient with glib classifications (though he didn’t seem to mind it when I mentioned Twiggy in reference to his tidy little shift dresses, particularly the one in red with a ruffle of white at throat and wrist).

He pointed out that no woman wore trousers. “Maybe that means something,” he mused. Or nothing. Touitou is fond of the loaded statement. But he also said there were a lot of prints and patterns, and no hint of darkness. Handsome boys, pretty girls: an unambiguously optimistic statement, which, coming from a designer who has a long career of political commitment behind him, carries some weight. Clearly the Fédération got it wrong. Touitou mulled over his ideal retort to their initial rejection: “What would you have said to Yves Saint Laurent?” Now there were some clothes!