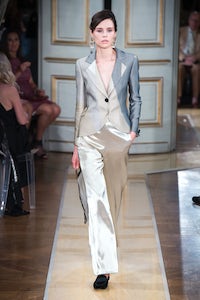 PARIS, France — Giorgio Armani showed his Privé couture collection in the gilded salons of the Italian Embassy, which seemed a much better fit than the blacked-out, oxygen-starved bunker in the Trocadero that he’s favoured for too long. In fashion’s experiential new dawn, you need something more than cold, hard concrete to showcase fabrics as sensually lustrous as lamé silk crepe, or silhouettes as cartoonishly grand as a baby mountain of pink ostrich feathers, or details as surreal as the pair of folded arms picked out in crystal, trompe l’oeil-style, across the bodice of a black velvet dress.

There was a rumour going round that Armani had come to the significant conclusion that he’d been trying too hard with his couture in the past, that he’d decided he needed to relax and just let it come naturally. At the same time, it was whispered that he was keen to communicate to a new generation what couture has always meant to him. He wanted to evoke that golden age that Avedon and Penn sealed for eternity with their breathless imagery. Balenciaga, Chanel, Dior, Givenchy…such was his register. (And here I was wondering why Armani’s countryman Roberto Capucci wasn’t featuring.)

In the past, Armani’s unsated appetite for eccentricity – which he maybe viewed as a way to change the persistently hidebound preconceptions of his imperial greigeness – has occasionally undone his couture. That wasn’t the case with the collection he showed on Tuesday. In a lengthy (oh, for an edit!) presentation, he offered a sober, restrained and entirely accessible proposal for the wardrobe of an extraordinarily well-heeled woman. The palette was primarily black and a neutral tone Armani called champagne which, in his hands, were made for each other.

The collection stumbled with a detour into pink (except for that mound of feathers, which seemed like the most appropriate vehicle for Pepto-Bismol). Otherwise, the minimal palette allowed for luxury that successfully asserted itself with a murmur, from a cropped jacket in black croc, with a single curving lapel of champagne lamé, to a one-shouldered column of black velvet, with a sculpted wing of lamé satin.

The emphasis was solidly on eveningwear, reflecting Armani’s conviction that he offers enough daywear elsewhere in his repertoire. Are there that many nights in a year? Armani certainly seems to think so. And his front row of award-winning actresses will surely find a use for his proposals. Armani offered them not fireworks, but the seasoned insights of a man who has slowly learned over decades to do what comes naturally, for him and for them.