Today's show was a perfectly pure Armani collection: a masterclass in soulful simplicity. 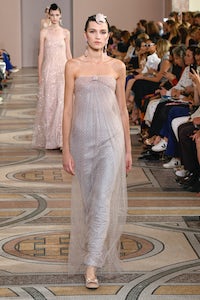 Today's show was a perfectly pure Armani collection: a masterclass in soulful simplicity.

PARIS, France — Over the past few seasons, Giorgio Armani has brought his Armani Privé shows out of the black box and into grand Parisian spaces full of natural light and beautiful architecture. What hasn't changed is the designer's protracted catwalk line-ups, which can often dilute his message. Today, this was a particular pity because what we witnessed was a perfectly pure Armani collection: a masterclass in soulful simplicity and masculine meets feminine; faultless jackets, light and dark (the movement from black to pearly pastels and back was truly lovely) and considered légèreté.

What really caught the eye was the veiling and the layering, which made skirts and trousers move like halos around the body. As ever for Armani, there were subtle exotic references, not exactly definable in terms of geographic or cultural provenance, yet redolent of Eastern, Middle Eastern and Asian flavors. The press release labelled it all "folk," which the collection was clearly not. Well, not in the sense of peasant skirts and traditional costume, but perhaps more in the Armani sense of looking at other cultures, as Italy's fashion king did extensively in one of his best creative seasons towards the end of the 1980s.

Of late, Mr Armani has been revisiting a few key moments of his own career, which spans more than four decades, making both fans, aficionados and fashion observers happy to reenact a glorious era. What makes this approach effective is the designer's lack of nostalgia. Armani does not pay homage himself like an artist who has lost inspiration. Rather, going back to the roots works like an endless affirmation of a style that evolves while it remains consistent. Now, that's an accomplishment: always the same, always different.