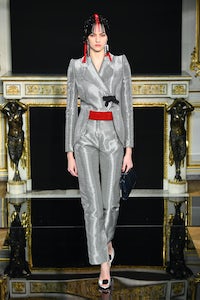 PARIS, France — It’s long been one of the clichés of haute couture that it is a private pleasure, something created primarily for the client’s own enjoyment. Giorgio Armani acknowledged as much when he called his couture collection Privé. But his latest Privé outing seemed equally designed to please himself. Consider it a journey round Giorgio’s mind.

He loves movies, he loves the 1930s, so it makes sense he would love a movie about the 1930s. One of the best is Bernardo Bertolucci's 1970 classic "The Conformist." It made its presence felt audibly and visibly: Georges Delerue’s soundtrack was Giorgio Armani’s soundtrack, Ferdinando Scarfiotti’s production design hovered in the Art Deco je ne sais quoi of Armani Privé, though that might be stretching a point because it was actually Scarfiotti’s design for Bertolucci’s "The Last Emperor" that was more significant.

Armani has always been passionate about Asia. One of the most fabulous follies of his early years was a samurai collection that still rouses me from slumber when it interrupts my dreams. Privé’s latest theme was LACQUER, specifically the Chinese red with which Scarfiotti glossed everything Imperial. Armani similarly lacquered his collection. In patent leather, it shone. In pavé sequins, it glittered. He boldly set the red against a startling blue. No compromise.

When he frothed the union with feathers or turned it into a harlequin collage, things got a little bit Big Top (is the circus really a couture theme this season?), but a jacket pressed from little sequined poppies matched to blue satin pants told the story in a more subtle way. The red on its own stood out (to put it mildly) in a sequined sheath topped by a pagoda-shouldered jacket in red croc. Armani was always keen to consign the sobriquet King Of Greige to the dustbin of history. He knocked it on the head for good and all with this look.

There were beaded flapper hats, and fringed flapper dresses, which, with the languor of the silhouettes, the shimmer of sequins and the redRedRED lacquer did kind of point to wild nights in Old Shanghai. The experience was cinematic, Armani the Auteur. Like I said, this he was doing for himself.