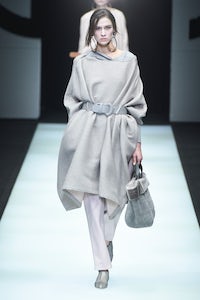 MILAN, Italy — “Inspired by many cultures as an ode to co-existence as opposed to exclusion.” To read those words in Giorgio Armani’s shownotes before his actual presentation was to feel a tiny twinge of anticipation. We live in the hopeful moment of his renaissance. And there are enough moments every now and again to foster that hope.

His last men’s collection was one such. This latest one, all 96 looks begging for an edit that would hone the story, didn’t quite have the cumulative impact, but Armani’s multi-cultural inspiration managed to absorb enough unexpected flourishes that it felt like a relative breeze. A poncho, a pouf skirt, a cherry blossom pattern, tie-dye, dhoti pants, a jacket’s tribal trim, a felted floral jacquard, beaded tops with errant fringing… this was Armani’s abstracted trip around the world. He never let you forget who your tour guide was. That was his Warhol-like silkscreen portrait printed on a skirt.

Fact is, Armani has mastered subtle superficiality in a way that probably even he would once have thought unlikely. A coat in silver-iest pony skin was the best example. A black velvet jacket with what looked like a forest fire rippling across it was another. Armani’s peculiar poetry often eludes the audience at his shows. But it does reward concentration.