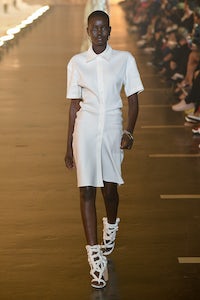 PARIS, France — Virgil Abloh is a cultural aggregator, not a fashion designer. He assembles masses of input and then decides which vehicle is best suited to his aggregation. Might be furniture. Or art. Might be planestrainsautomobiles. Sometimes, it’s fashion.

His latest exercise in womenswear opened with words from Dr. Mae Jemison, the first black woman to travel in space aboard the Space Shuttle Endeavor. She was speaking to an audience of young girls about space in the 2018 interview which provided the opening snippet of soundtrack, and if my ears didn’t deceive me (and they usually do), she was trying to qualify the difference between art and science. Was it intuition? In my book, that would be more similarity than difference.

Anyway, science was the core of the show. It was called “Meteor Shower,” as in unexpected impact, as in craters created by meteors. According to Abloh’s notes, the collection’s “hero piece” was a bag called the Meteor Shower Jitney. It was pierced by big circular holes, rendering its function obsolete. An art piece, in other words. Those same notes referred to those same holes as “a new branding system.” It was an odd coincidence that John Galliano’s collection for Maison Margiela also featured big round holes. I flashback to Rei Kawakubo’s hole-y pieces four decades ago. Then, she talked about “a new lace.” Abloh’s inspiration, on the other hand, was apparently “cheesehead” hats from his alma mater, the University of Wisconsin, a state famous for its dairy products.

There was another echo of Galliano’s latest showing in the nursiness of the white outfits that opened the show. Of course, this was sheer coincidence, but it was a reminder of the challenge that Abloh perpetually faces in his high fashion outings. The echoes, the endless echoes of other people's work. Maybe all that really does is highlight how fashion spins on an endless cycle of appropriation. When Abloh walked Georgina Grenville down a runway in clothes with artful cut-outs, who wouldn’t be reminded of her Testino-lensed ads for Gucci? Or, who wouldn’t see American fashion’s forgotten genius Rudi Gernreich in some of the other skimpy bodcon? Or Claire McCardell or Isaac Mizrahi or any designer who doesn’t pop up on a search of “evening skirt, patch pockets”?

Abloh is definitely a people person. He would have to be to inveigle the peerless collaborations that have so far marked his career. This time, it was Roman and Erwan Bouroullec, Paris-based industrial designers who provided a print of slices of shale under a microscope. Arbitrary, adding virtually nothing to the collection, but reinforcing Abloh’s credentials as The Cross-Disciplinary Guy. In that, he is a rare triumph. But there may be something valedictory for his fashion skeptics in that the laurel wreath of fashion — at least the kind of fashion that shows up to be judged on a catwalk a couple of times a year — continues to elude him. It might be the one galling moment his intuition fails him.