At Bottega Veneta, a Take On New York Boldness

Tomas Maier applied his own peculiar precision to the current appetite for the flagrantly decorative, but the theatricality of the staging didn’t really do much for the clothes. 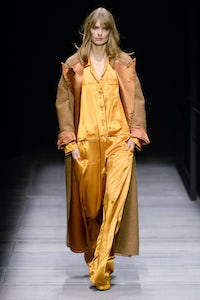 At Bottega Veneta, a Take On New York Boldness

Tomas Maier applied his own peculiar precision to the current appetite for the flagrantly decorative, but the theatricality of the staging didn’t really do much for the clothes.

NEW YORK, United States — In the full flush of his misspent youth, Tomas Maier would head out into the New York night to dance at Studio 54, all jumpsuit a-go-go with his disco corona of long curly hair. The image is startling for anyone who knows him only as the monkish master of restraint behind Bottega Veneta, but it was in that spirit of long-ago indulgence that he presented his new Bottega Veneta collections of mens- and womenswear to Manhattan on Friday night.

It had to be a show about New York, not simply because Maier had re-located the presentation from Milan, but also because the label opened its new “Maison” this weekend: 15,000 sq.ft. of all things Bottega Veneta — clothing, accessories and home — spread across three 19th century townhouses on Madison Avenue. So Maier claimed inspiration from the boldness of New Yorkers. “Nothing stops them, nothing seems impossible,” the shownotes quoted him.

It was the first time in Maier’s 16 years at Bottega Veneta that you could use the words “messy exuberance”, but, in an odd way, that also meant it was the first time you could say he was in sync with what’s happening in the wider world of fashion, or at least that corner of it where Gucci has unleashed an appetite for the flagrantly decorative. What Maier brought to that notion was his own peculiar precision, his fetishistic attention to detail and fabrication. It wasn’t clear during the show that the topstitching on a lapel or the windowpane check on a jacket was actually fine silver chain. Shearling was intarsia-ed, or lacquered, so it was completely unidentifiable. Likewise a silvery coat, felt and satin somehow combining to look like foiled leather.

The sense of release that permeated the collection was probably clearest in the handbags woven from BV’s signature intreciatto. The weave looked like it was falling apart in a froth of fringe. Maier also worked colour, texture and pattern in ways — occasionally clashing — that evoked New York’s New Wave energy in the 1980s. (You could have done a fashion shoot for the late, lamented Soho News with a lot of these looks).

Award-winning set designer Scott Pask created a broad backdrop which looked like an expensive but anonymous apartment, furnished with a mix of low-lying mid-century Italian pieces and Bottega Veneta’s own furniture, plus one magnificent, terrifying John Chamberlain sculpture. The theatricality of the staging didn’t really do much for the clothes, except for Maier’s last passage of languid, velvety eveningwear, which looked right at home in the set. They were actually a valuable reminder of how often Maier’s designs, with all their virtuoso detail, usually loan themselves well to the creation of character. The scale of this event unfortunately dimmed the subtlety. Still, if the designer ever felt like a thwarted impresario, this was definitely the night when he could put those feelings right, even better in the city where he once lived a decadent dream.