The collection had an oddly domestic feeling yet almost every piece looked ready to rave, reflecting the dichotomy of the times. 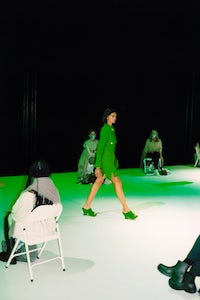 The collection had an oddly domestic feeling yet almost every piece looked ready to rave, reflecting the dichotomy of the times.

All Daniel Lee has seen for months in Milan is the inside of his car, his office and his apartment.  The Spring 2021 collection that he launched for Bottega Veneta on Monday reflected that limited world, taking its inspiration from such prosaic items as his sofa, his duvet, an old beaded car seat cover, the carpet in his flat, things that were around him.  But it didn’t feel restricted in any way.  Quite the opposite in fact. As much as it had comfort and domesticity at its core, especially with all the knitting and crocheting, it was also a sophisticated celebration of craft and ingenuity and reassuring humanity in the face of an extraordinary challenge.  Lee’s sister works in A&E in the UK, so she has been on the front line of the covid pandemic.  Looking at what she had to do as the situation steadily worsened at home, he had a moment when he began to question the worth of his own job. You can find his answer in the name he gave the new collection: The Importance of Wearing Clothes. Lee reassured himself with the notion that clothes not only protect but they also give pleasure, even emotional succour.

I say Lee launched BV’s Spring collection on Monday, but that’s not strictly accurate. In October, he presented a salon show on the stage of the Sadler’s Wells theatre to a small, very socially distanced audience drawn from his new BV community: artists, journalists, musicians, including Neneh Cherry who created an original soundtrack, plus the odd celebrity.  “Since then,  I’ve had time to sit with the collection, refine it, put out what I wanted the world to see,”  Lee said on Monday.  “I’ve overdosed on digital presentations.  I wanted to give people something they can enjoy, take time over, use to escape from the moment.”

What showed up at my front door was the latest in a long line of artful alternatives to the traditional fashion show that designers have offered this year.  There were three books and a 12″ record on yellow vinyl (Neneh’s soundtrack) zipped into a tote in the vibrant apple green that Lee has made BV’s calling card.  “The idea was to open our world to people even more than we get to do with the seven-minute moment of a show. Here you’re able to look at it with your own pace.”  Inspiration, execution, result…these were the hinges of a deep dive into the creation of a collection.

So Book One was a wide-ranging grab-bag of images, people and things that have inspired Lee,  akin to the moodboards-in-bookform that his old boss Phoebe Philo used to distribute at her Celine shows.  Making more than one appearance were P.J. Harvey and Rihanna.  “Because they’re completely in charge,” said Lee.  “Their work, their passion is all about them, and that’s very Bottega Veneta.”  The Italian artist Lucio Fontana made more than one appearance too, “for his raw materiality, his mastery of technique”.  Then there was Halston.  “Studio 54!” Lee enthused. “Anyone who misses that moment wishes they’d been there.  The fun, the freedom.  Halston’s work embodied that.  It was very direct, about the body, about women feeling gorgeous.”   There were also photos of other designers,  which seemed a very generous gesture.  “We’re all influenced by each other,” said Lee, “and I think this year has emphasized a community spirit, which I wanted to celebrate.”

Book Two was a collaboration with the German conceptual artist Rosemarie Trockel, whose best-known work was created on a knitting machine. Lee started out in knitwear and he’s always admired Trockel.  He didn’t want the record of his process to be banal pictures of himself pinning fabric.  “I wanted someone who could work with all the elements, the swatches, toiles, samples, the things that never get seen.  Rosemarie was supposed to be working on a show for the Tate this year, but she was on her own at home outside Berlin so she was available.”   It was Trockel who came up with the title The Importance of Wearing Clothes.  Woven through her occasionally forensic images of the work in progress were personal testaments to that importance from a few dozen voices.

And finally, Book Three,  Tyrone Lebon’s photographic record of the Sadler’s Wells show in October.  The location was significant.  Lee is a longtime fan of contemporary dance.  His Autumn 2020 collection was infused with movement and stretch.  Same thing here, but with an added poignant note that people have essentially been restricted to their homes this year, making movement an expression of freedom.  And, in response to the times, Lee’s clothes also embedded an odd domestic feeling.  Imagine little tank dresses hand-knitted or party dresses crocheted at home in lockdown.  “Things that were around me”: the duvet coat, the little flapper dress reconfigured from the wooden beading of a car seat cover, the jacket with echoes of a candlewick bedspread. And always knitwear. “Comfy clothes often look sloppy,” said Lee, “but I was interested in the connection between done up and comfortable.”

It’s something I loved about London when I moved there, the beauties who arrived in clubs (I’m talking about you, Trade)  looking perfect only to be turned into heedlessly glorious messes by a couple of hours on the floor.  Maybe that’s an extreme connection between done-up and comfortable, but Lee seemed to crystallise the dichotomy with footwear that alternated between elaborate platforms and ravers’ slip-ons.  The clothes had a similar range.  Almost every chic little something, for both women and men, looked ready to rave.  That was Lee getting personal, getting human.  “I know people for whom clothes are completely functional and people who are the exact opposite,” he said.  “Me, I’m ready to dress up now.  I’m impatient to travel, to see people, to look good again.”  His collection reeked of that, in the nicest possible way. 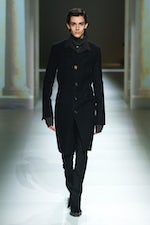 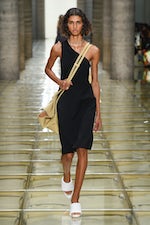 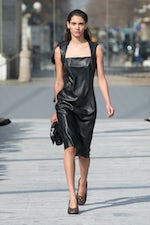 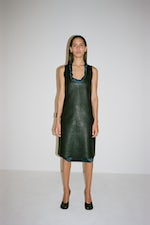