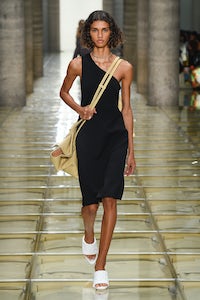 MILAN, Italy — Evolution is a word that Daniel Lee comes back to often as he shakes off Bottega Veneta’s past and forges his own vision for the brand, but rather than evolution towards some refined ideal, Lee favours a direct, even blunt approach. It sits in brutal contrast with the characterful ambiguities of the Tomas Maier years. That’s the shake-up uncertain times demand of new creative directors. The mandate for change needs to come through loud and clear.

It was certainly clear when it was distributed all over Milan as a big slab of clear plastic in which the show invitation – a swatch of crinkled gold fabric - was encased. They’ll still be picking those babies out of landfill in 5000 years. In this waste-conscious moment where some designers aren’t sending out physical invitations at all, this one felt like a statement. Kind of imperious. The venue elaborated on that impression, with a perspex catwalk laid over clouds of BV’s signature intrecciato leather weave blown up to Brobdingnagian proportions. There were big, squidgy leather ottomans too. Everything, BIG! Which was also where Lee took the clothes.

The collection had an aggressive air: bold, over-sized silhouettes, details drawn from military and utilitywear, a lot of head-to-toe monochrome, and a lot of leather. Skins are a BV staple. Lee made the most of them, cutting huge parkas and coats which he shirred into a gather at the back. For both men and women, he was very drawn to an all-in-one. The top half might be a trench, a flying suit, an evening jacket. They all ended in a baggy short at the knee. It was an unlikely, not wholly flattering hybrid - tough clothes for hard times — but it embodied his desire to rejig house codes and court a more adventurous new audience.

Rumour has it that Lee has already made his mark with his accessories, the crux of the BV business. Here, the emphasis was on a satchel and a huge, crossbody sac in intrecciato writ large. When Lee talked about his “process”, it was clearer here than in the knitted pieces, for instance, where the twists and folds and cut-outs which were presumably intended to sensually highlight the body came off as tricksy. But the luxurious functionality (or functional luxury) of those bags makes them a hardy fashion perennial. Lee is getting that much right.