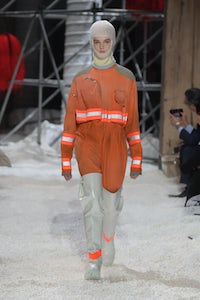 NEW YORK, United States — So this was the last part of what Raf Simons was calling his Calvin Klein trilogy and, in keeping with his commitment to elaborating on a thread rather than starting anew, it linked to its predecessors, in specifics like the cowboy and college kid quotes, but also in the unsettling mood of menace of which the designer is proving himself a master.

He insisted there was more hope, less horror than last time, but Sterling Ruby’s dripping red pompoms were still hanging in a spooky old barn that looked ripe for a visit from the Creeper. It was printed with Warhol’s "Electric Chair" to compound the eeriness. And the movie references Simons mentioned hardly oozed optimism. In Todd Haynes’s 1995 "Safe," Julianne Moore succumbed to a debilitating mystery illness. In Sofia Coppola’s recent remake of "The Beguiled," Colin Farrell succumbed to Southern schoolgirls during the Civil War. In both movies, the environment concealed unknown threats, which amplified this collection’s theme of protection: the knitted hoods (a direct quote from "Safe"), the metallic bonnets, the firefighters’ jackets with their reflective strips, the hazmat jumpsuit with the white waders (perfect for cleaning up your next chemical spill). Better "Safe" than sorry. There were padded wool vests, like body armour, and foiled pieces that looked like a mutant blend of cocktail dress and anti-radiation suit. Open at the back, too. Like hospital gowns.

Simons said his focus from Day One had been the appropriation of “elements and symbols and clothes and casting." That’s a smart way to cope with a subject as vast as the American landscape. The things that everyone knows offer a way in. Everyone knows movies and television. And the popcorn that goes with them. The models walked through snowdrifts of the stuff (three huge semi-truckloads). The audience sat ankle-deep in it. Appropriation? Never seen anything like it.

“But I wanted to experiment with it more,” Simons added. So he mixed it all up, layering the tech and the traditional, the sweet and the scary, bias-cut dresses that were a vision of haute Hollywood and astronaut silver foil. Yes, the silver foil was astronaut, not anti-radiation. It was played against prairie patchworks (the same quilt patterns he used for Spring). Both pioneer past and silvery future are nostalgic American dreams. The vision of the South offered by "The Beguiled" is tainted by a more toxic nostalgia. That’s another thread – a darker one – that Simons subtly wove into his show. For all that he is absorbed by Americana, he has closed all three parts of his trilogy with Bowie’s "This is Not America." And, once again, Michel Gaubert’s soundtrack elaborated on the theme. Iconic they may be as pop songs, but "Monday Monday" by the Mamas and the Papas and Simon and Garfunkel’s "Sounds of Silence" are both sodden with sadness.

On a more upbeat note, Simons once again proved his mastery, not just of subliminal menace, but of sublime outerwear. Likewise, the chunky artisanal knitwear, apocalypse-proof. There was hope in that. You could certainly say so for the sweaters intarsia-ed with the Roadrunner and Wile E. Coyote (whose landscape was, of course, Monument Valley, one of America's greatest). Wile E. is a symbol of indomitable survival, if ever there was anyone who took a lickin' and kept on. Maybe this is America. The new one.