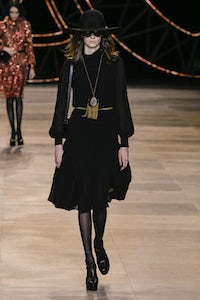 PARIS, France — Hedi Slimane is exactly where he was — again. This season, Celine did not progress, showing the courage — and the narrowness — of the creative director’s vision. Hedi does Hedi. In this sense, Slimane is brave: he believes is his ideas, no matter what. This season he moved a bit further into the Sixties and Seventies, but the root references did not change. And they are as literal as ever, from beatniks to bohemian ladies in capes or pleated silk dresses and large brim hats. There was strictness here, some sparkle there, a lot of velvet, unisex everything — bags included — and jewellery developed with the acclaimed French artist Cesar. But ultimately it was endless déjà vu.

Sure, the tailoring was mean, and one has to commend the designer for sticking to his guns. But in a time of plurality, it was astonishing how much Slimane insists on singularity. His fashion calls for a specific body type, a specific attitude. You either like it or not, tertium non datur. The fact is, that skinny maudit thing does not look that cool anymore. It looks dated, in fact, like Slimane is trying too hard to deliver his ideal of what a youngster might like. This ultimate lack of coolness might actually be a kiss of death. Perhaps, it’s time to move on — or not give a damn and stay singularly still.