It was Natacha Ramsay-Levi’s most considered and assured outing for the house: a further step forward in the ongoing process of softening and letting go that started last season. 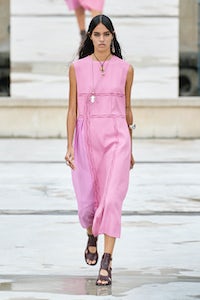 It was Natacha Ramsay-Levi’s most considered and assured outing for the house: a further step forward in the ongoing process of softening and letting go that started last season.

PARIS, France — “This collection was about letting it go,” said a radiant Natacha Ramsay-Levi over Zoom today. “Embracing the uncertain and what can happen when you give up utter control.” The words sounded particularly strong, coming from a designer who, in the past, has been very much about control. Of course, Ramsay-Levi was referring to the captivating tranche-de-vie choreography of the show, with models arriving from whichever direction on the makeshift runway outside the Palais de Tokyo, walking from the street to the podium. But as Marshall McLuhan poignantly pointed out, the medium is the message, so the clothes, too, worn by strong women from all walks of life, were about letting go.

“A season in hope” was the perfect title. Watching such a spectacle in remote was honestly a bit of a bummer — IRL it must have been thrilling — but the surveillance-style editing of the images in the live transmission was actually quite catchy, adding a definite nouvelle vague, cinema verité feel to the affair. It made for Ramsay-Levi’s most considered and assured outing for the house: a further step forward in the ongoing process of softening and, yes, letting go that started last season.

There was an air of soft rebelliousness to the proceedings: poetic rather than in your face, and very engaging, very womanly, very connecting of opposites. The mix of soft tailoring and dresses, of dusty colours and neutrals was a joy to behold, and the addition of the slogans/artworks of artist Corita Kent felt true to the message, and aesthetically coherent. Involving female artists is something other houses are doing to death, but it is something that Chloé’s founder Gaby Aghion cultivated way back when it was not so common. So is the brand’s emphasis on the female gaze, on womanhood as sisterhood. Today, it felt authentic, not a mere communications trick, and it felt uplifting. It’s nice, sometimes, to see things with a soul.