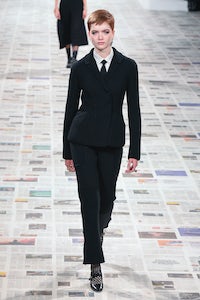 PARIS, France — The latest chapter in the history of feminism that Maria Grazia Chiuri is writing at Dior had its roots in her own teenage, in the year 1978 to be exact, when the battle for women’s rights intensified in Italy around divorce and abortion. “Women began dressing differently,” Chiuri remembered. She wanted jeans and fleamarket pieces, not the pretty dresses her mother picked out for her. Still, Mama was on Chiuri’s moodboard, looking chic in a red pantsuit. And it was a pantsuit that opened her show, black with a white shirt and tie, worn by Ruth Bell who, with her blonde crop, looked like a perfectly tailored tomboy.

But the suit was knitted cashmere. So were a lot of the jackets, the pants, the skirts and — the pièce de résistance — the bar jacket, the Dior icon. In the past, Chiuri has taken flak for her feminist proselytising. Here, there were undoubtedly people who felt hectored by feminist art collective Claire Fontaine’s huge neon surtitles, indisputable though the messages might be: WHEN WOMEN STRIKE, THE WORLD STOPS or WOMEN’S LOVE IS UNPAID LABOUR or WE ARE ALL CLITORIDEAN WOMEN (a fuck-Freud reference to the essence of the female orgasm). They were all blasts from second-wave feminism’s past. Same with Chiuri’s collab with Judy Chicago on Dior’s spring couture. They begged the question, how did this relate to a fashion collection in February 2020, aside from creating an overpowering context? Chiuri offered a more accessible answer here than she did with her couture. While the neon signs above the models’ heads were blasting the patriarchy, she was presenting her own riposte to a male-dominated world: structure de-structured to be fluid, easy, and as empowering as woman-friendly cashmere-softness could ever get.

“Women work with the idea of creating something that is really comfortable for the body,” said Chiuri, while she was reflecting on French fashion pre-war and post-war, when the fluid line of female designers like Chanel, Lanvin and Vionnet was replaced by the sculpted silhouette of Christian Dior. “People talked about him as an architect,” she said, “which was a very masculine idea.” His Bar, her Bar: Dior’s evolution in one shapely nutshell. But there was one designer in between who eased her path. Of all Dior’s creative directors, Marc Bohan’s 29-year tenure was the longest, but he only really got his due with Dior’s massive 70th anniversary retrospective in 2018, around the time Chiuri was hired. He was a revelation for her. “When you think about Dior, you think about silhouette, but Bohan broke the silhouette. He didn’t need it.” In her new collection, she borrowed Bohan’s check as a key motif in tribute, then cut it on the bias to make it flow. She also took on his sportswear attitude, in the puffa jackets (he introduced skiwear to Dior) and the denim.

The T-shirt of the season read “I Say I”, a declaration of self-assertion borrowed from the Italian intellectual Carla Lonzi, big in ‘78. It is also the title of an upcoming exhibition of feminist art that Dior is sponsoring in Rome. (Claire Fontaine will be part of that show.) Again, such literal earnestness in a fashion context would once have seemed incongruous. It’s to Chiuri’s credit that she has made it not so. Fashion is, after all, a mirror. CONSENT, blazed one of the neon signs. Harvey Weinstein was found guilty yesterday.