Maria Grazia Chiuri's most successful collection to date combined her Roman Alta Moda roots with Parisian theatrics to glorious effect, but it could have benefited from a more judicious edit. 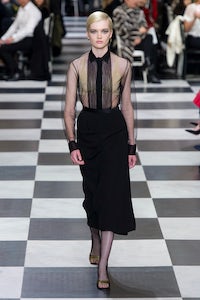 Maria Grazia Chiuri's most successful collection to date combined her Roman Alta Moda roots with Parisian theatrics to glorious effect, but it could have benefited from a more judicious edit.

PARIS, France — Vittoria Ceretti’s bared collarbone bore a tiny stencil of the words "Il ne s'agit pas de comprendre mais de croire” when she walked the Christian Dior couture show on Monday. “It’s not about understanding but believing.” The quote was Jean Cocteau’s, a friend of Dior’s, and also a pillar of the interwar art world in Paris. It was the designer’s relationship with that world — as a gallerist before he became a designer — that captured Maria Grazia Chiuri’s imagination with her new collection. She felt they were the years in which he defined himself. And she was entranced by the Surrealists in Dior’s circle, especially women like Leonor Fini and Lee Miller. “Strong in a time which was so much more difficult than now,” Chiuri said.

Surrealist references infiltrated every aspect of the show. The usual location – a pavilion in the gardens of the Musée Rodin – was transformed: mirrored ceiling, chessboard floor, walls draped in stucco-ed fabric. Quotes from Dali paintings – lips, eyes, nose, hands – rendered huge in classical white plaster casts, floated overhead. And the clothes? Chiuri worked mostly in black and white. The Surrealists were fascinated by the subconscious. “And black and white are the colours of the self-conscious,” she claimed. “You dream in black and white.”

Right at the top of the show, she offered dresses in black and white dominos, a nod to the Surrealists’ love of games. (An op-art chessboard skirt followed soon after.) They also used cages a lot in their work, as an instrument to control and to emphasize the body. That was a suggestion Chiuri pushed to the max, with lattices that defined her models, underpinned tulle, or added spine to chiffon. Chiuri’s career in fashion has been characterized by long gowns whose sheerness was the stuff of fairytale princesses, but here the body-consciousness was edgier. Accessorized with inverted masks by Stephen Jones, which covered the face but revealed the eyes, it was even a little fetishistic. Chiuri said that Leonor Fini loved the Surrealists’ masked balls, “but she went to represent herself, not to dance, because she believed the mask you chose revealed who you were.” On Monday night, Dior hosted a masked ball to test Fini’s theory.

The collection was Chiuri’s most successful to date because it came closest to combining her own roots in Roman Alta Moda and her new position in Parisian haute couture. “The two traditions are different,” she explained. “The Italian is sartorial, the French is cinematic.” The show closed with ten or so pantsuits where her Italian sensibility met Dior’s bar jacket to spectacular effect, especially in ivory, and in the cape jacket sported by Kiki Willems. Cinematic? Where do you start? A cape encrusted with white feathers and flowers had the requisite extravagance. But discipline and fantasy combined gloriously in a bustier dress with pages of white organza trimmed in black. It would have been even more a stand-out if the collection had been more judiciously edited for the show.

In a real-life twist that bordered on the surreal, Chiuri fell down stairs at home in Rome on Christmas Eve and broke her femur. Stephen Jones was going to fix a dressy little something for her crutches when he arrived in Paris, but last week he had a fall too, which broke his shoulder and his left arm. Both of them are looking at three months under wraps, and another six in rehabilitation. “It’s a reminder we’re only human,” Chiuri sighed. Or it might be telling the surrealistically inclined amongst us, if Depeche Mode hadn’t already done so, that God’s got a sick sense of humour.