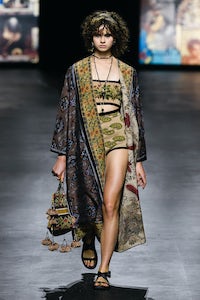 PARIS, France — During her digital chats over lockdown, Maria Grazia Chiuri noticed how different her friends’ reactions were to being stuck at home. Some would put on lipstick first thing, then make an effort with their outfit. Others never changed out of a t-shirt. She admitted she fell into that group, and yes, she was wearing a white tee during our zoom. The key thing, she felt, was that either way, fashion was no longer a dialogue with other people. Instead, it was all about an intimate conversation with the self: what makes me feel good?

The collection Chiuri offered for Spring 2021 addressed both impulses — dressing up and keeping it simple— at great length and on a grand scale. Oh, for an edit! Eighty-six looks were shown to what looked on screen like a substantial audience in a massive tent erected in the Tuileries with a backdrop of towering digital “stained glass” collages by feminist avant-gardist Lucia Marcuzzi and a forceful live soundtrack of “Sangu di Rosa,” a female choral work that was traditionally performed at funerals in 19th century Corsica. A really big statement about intimacy felt somehow off, especially when Chiuri had just been waxing so lyrical about how reflection on “less public life, more domestic life” had shaped a collection that she insisted was more intimate. Never mind that there was also a second wave of virus lapping at the city outside.

But when we last encountered Chiuri in July, she was showing Dior’s resort collection in Puglia, and that glorious, albeit audience-less, celebration of creativity and community had clearly stayed with her. She considered it one of the best experiences of her professional life. Maybe that’s why she wanted to stage something equally spectacular in Paris. “I really like to work in a communal way, not in a room alone with a sketch pad,” Chiuri said, “to share my emotion and passion with other people from different experiences.” The only way for that to happen in her playbook must be to go big or go home.

The travels of Dior shows are legend, but this season, all the travel was perforce in Chiuri’s mind. There were Indian paisleys and Indonesia Ikats, silhouettes influenced by Japan, suggestions of an Ottoman seraglio or a Bohemian salon. She claimed she was very partial to collage, especially the ones made in the '50s and '60s by Lucia Marcuzzi, the presiding aesthetic spirit of the show. Chiuri commissioned the young artist Alina Marazzi to make a film about Marcuzzi, which preceded the online debut of the collection. It wasn’t the most enlightening prelude. The inspiration provided by the late Germano Celant, art critic and curator, was more illuminating. He wrote an essay called “To Cut is to Think” (it sounds much better in Italian: Tagliare è Pensare), which clarified for Chiuri the idea that a collage translates something from the past into a new language for the present, then moves into the future.

She loves words. Maybe that would surprise people who only know Chiuri through her work. But her other guiding lights in this collection included Virginia Woolf (there’s the Bohemianism) and Susan Sontag (that big white shirt). The enveloping softness, the faded fresco prints, the fine floral embroideries, the silk crochet, the tasselled bags and tousled hair and headwraps and sandals…there was a poetry in them, more predictably so in the watercoloured sheer chiffons that floated all the way back to Valentino for Chiuri. There were enough of those particular pieces to diffuse, even dilute, the show.

But Maria Grazia came back down to earth with more resolutely plain pieces, Japanese workwear almost. She said she’d been looking at Nanni Strada, who was big in Italy in the 60s and 70s, and, in trying to find a Dior co-relative for Strada’s flat-planned, industrial designs, she’d uncovered a jacket Monsieur Dior designed for a collection in Japan in 1957. And there you have it: the past translated into the present, moving on determinedly into the darkening shadows of the future.