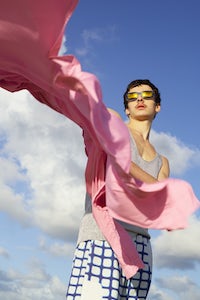 PARIS, France — In his own thoughtful, beautifully worked-out way, Dries Van Noten has always been one of fashion’s greatest showmen. But what is a showman without a show? Spring 2021 provided an illuminating answer. The digital package Van Noten put together for his collection was dazzling. Appropriately so, given that a major inspiration was the kinetic visual extravaganzas of avant-garde Kiwi filmmaker Len Lye. When Van Noten came across them online, he assumed they were psychedelic artifacts from the 60s. He was astonished to discover they dated from decades earlier.

Lye was obsessed with “the art of movement.” Dutch photographer Viviane Sassen filmed models dancing in Van Noten’s clothes with Lye’s immersive visuals projected on them. It looked just like kids tripping out at the Fillmore in the First Summer of Love. That’s certainly not the first time that Van Noten has been drawn to altered states. When I suggested he may have a psychonaut alter ego, he blamed his education. “I was taught to walk in a grid and wear a uniform. I still do now, but in my consciousness, there is an explosion of fun. Maybe one of the ways I express myself is the way I put flowers together in my garden.” Another was surely the vicarious sense of joyous abandon that saturated his Spring collection, from Sassen’s film all the way down to the last multi-coloured ruffle.

At a time when his usual methods of creation and communication were curtailed, Van Noten and his team were compelled down new paths. His last two collections were polar opposites, last Spring the euphoric collaboration with Christian Lacroix, Autumn/Winter in February a darker, almost narcotised affair, intimating the disturbing times to come. After the months of lockdown and enforced isolation, he felt a clear mandate for his latest: beauty, yes, but not the beauty of a fashion dream, more something to energise and uplift. Then he found Len Lye. Capturing Lye’s saturated colours, light projections and solarised effects in fabric was enough of a challenge that it quickly became obvious to Van Noten that it was more cost- and time-effective to combine his menswear and womenswear for the first time. But that was also ultimately so liberating for him that it may be one change that sticks.

Here’s hoping this next one does too. Van Noten has never advertised or designed pre-collections, or, as he said, “created fashion editorial to translate my message through imagery.” Until now. He’d always wanted to work with Viviane Sassen. A scrupulously distanced two-day shoot — one on the beach in Rotterdam, the other in Amsterdam — produced 78 photos. They’re gorgeous, all the movement and colour that are Sassen’s signatures, all the irresistible high/low hybrids that define Van Noten’s designs: the couture sleeve and the chino, the delicate organzas and glam rock metallics, the broderie anglaise cut from leather! Van Noten isn’t partial to sloganeering in fashion shows but there was a flash of YOU in one of Lye’s projections and it became the print of the collection. “It was so simple and direct. YOU is more important than ever. The ME era is over.”

I was feeling morbid, the political noise out of the US and the UK being so goddamn awful. But there has been some consolation in the way designers are rising to the digital occasion. “We have our two feet on the ground, we have to move on,” insisted Van Noten. “A lot of things had to be changed. We can’t be sad about what we’ve lost.” That was cheery. It made me think that if some even more catastrophic circumstance should dictate that this would be Dries Van Noten’s last collection, at least it was a magical way to say THIS IS WHO I AM. I told you I was feeling morbid!