Distressed textiles took centre stage at the Fashion East show — a somatisation of a dystopian landscape. 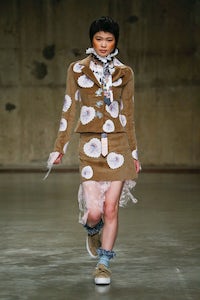 Distressed textiles took centre stage at the Fashion East show — a somatisation of a dystopian landscape.

For Matty Bovan, the intention was to create a hand-crafted mash-up of knits and crochets, from rectangular panels, in earthy and mossy colours that draped the body like frayed rags and were layered with found driftwood jewellery. Some of the yarn was soft lambswool and cashmere sourced in England, Scotland and Italy; others were boiled wool and rootsy marl and acrylic, or ex-designer surplus. What made it more than a dishevelled throwback, though, was the attention to subversive detail; glistening metallic threads ran through the murky knits and fluorescent mountaineering cord.

Bovan had been watching Blade Runner, Dune and Alien, drawing on sci-fi's obsession with apocalyptic scenes. "I wanted to do sci-fi differently — a new kind of futurism," he said, wearing a neon hi-vis jacket. "In all the sci-fi films, all the evil is faceless corporations." That explains the "mass-produced, shiny-looking" patches of "Bovan Corporation" badges on some pieces and the 14th century woodcut prints of heraldic beasts: dragons, witches and more dragons.

If the gritty looks resemble Medieval tabards or re-pieced doublets, that's because York-born Bovan drew on his hometown's ancient history. He doesn't consider himself a political designer, but his artful melding of pre- and post-industrial craft was culturally apt — as well a refreshing antidote to mass-produced street wear and logo slogans.

Another highlight was newcomer A Sai Ta, who won acclaim at Central Saint Martins for his elegant overlooking embroidery, which has a feathery sense of movement. Ta is British-Chinese and grew up in South London. "It's about mixing Chinese references with the ones from when I was at school, like Jane Norman and chav girls — girls who know they're fab." There were subtle nods to those girls in the form of a boho disc belt and slinky knit dresses, as well as Mutya Buena on the soundtrack. Overall, however, the exquisite technical knits were what stood out, especially in motion.

Perhaps unfortunately for Mimi Wade, the cartoon-loving designer didn't get the memo. Wade is a brilliant stylist — and her collection will certainly look cute, as in kitsch, in a photograph or on social media, however her collection of Pink Panther-inspired slip dresses with kitsch fluffy clouds and baby-hued lurex fell flat in the shadow of her technically-minded peers, largely due to a lack of polish and craft.