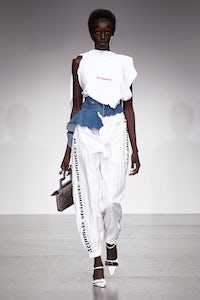 LONDON, United Kingdom — Faustine Steinmetz has graduated from art installation-type presentations to a fully blown catwalk show. Bear in mind, this is the designer who once said she'd never do a show because she wants to avoid the sensationalism of models on a plinth as the zenith of sex and glamour. Despite that, Steinmetz is at the stage where she needs to grow her business and the opportunity to show her clothes in full looks could take her from one of London's fledgling voices to a more prominent position in fashion.

She certainly did it on her own terms. The casting was diverse and the models looked like true Londoners. In the collection, she worked on variations on nine key items: the trench coat, the Fendi baguette; blue jeans; a white t-shirt; an Hermès scarf; a tracksuit; a white shirt; a denim jacket. Combined, each of those items comprise a core wardrobe that fashion magazines often profess to be the ultimate staples.

Paris-born Steinmetz focused on each one, photocopying the patterns, then deconstruction and re-constructing them with her textural weaving technique. Whereas previously, the installations she has staged have led to some magical moments ideal for social media — such as an entirely bedazzled Canadian tuxedo — this time saw her concentrate on clothes in real life.

The variations on singular items demonstrated her ability to refashion the familiar into something unexpected. It's a simple concept but surprisingly overlooked There were the painted jeans, as in actual brush strokes turned into rubbery fabric, and threadbare jackets that were wispy and light. What especially stood out were the nude chiffon trousers that were layered with seamlessly floating bonded yarn.

Even the namesake branding, seen on her intricate track suits and playful riffs on the classic brown Fendi baguette, were grounded by the sheer scale of her technical prowess. She may receive a cease-and-desist letter, but it would only serve to show just what a force Steinmetz is becoming. Plus, the deconstructed trench coat, complete with red and camel overlocking, made the trench look cooler than it has done in a long time, especially compared to its biggest and most famous proprietor.