It was an intriguing introduction to her latest paean to sophisticated sustainability. 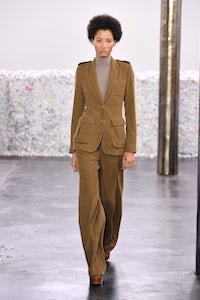 It was an intriguing introduction to her latest paean to sophisticated sustainability.

NEW YORK, United States — With a flat cap covering her choppy, floppy blonde haircut, Gabriela Hearst looked a bit like Bowie in his Berlin phase. The same high-cheekboned angularity, the same haunted androgyny. Apparently it wasn’t the first time someone’s made the comparison. The digital turntable in Hearst’s studio was playing Creedence Clearwater’s Who’ll Stop the Rain. Her mother was a fan. There was a Creedence poster on one wall, and a gorgeous painterly photo by Pedro Almodovar propped against another. That sent Hearst into raptures about Pain and Glory, me fangirling right along with her.

All in all, it was an intriguing introduction to her latest paean to sophisticated sustainability. You can’t separate Hearst’s life from her work. What you see or hear with her is what you get with her clothes. She grew up a country girl on her family’s estate in Uruguay, so close to the rhythms of nature that she was acutely aware of the consequences of human activities. Hearst was also clearly educated to appreciate thrift and practicality and craft, translated now into her use of every scrap of fabric, every spare fibre. That was the premise of her collection: if natural resources are limited, how do we create with what’s already in existence?

Well, you create things that are so precious you’ll never want to throw them away. And, for that, you need to start with scraps and leftovers that are the very best to begin with. One word: cashmere. The Italian mills have wised up. “Even six months ago, you didn’t see as many options,” said Hearst. The caveat was that she had to use the “eco-yarn” in the colours supplied by the mills: navy, olive, maroon. But the significant price difference from new cashmere made the pricing pill easy to swallow. She showed that new cashmere in undyed sweater dresses. She also developed a cashmere corduroy, cut into a strictly tailored field jacket and a pea coat, which she collared in a cashmere bouclé. Cashmere bouclé! Consider that Hearst’s take on shearling. There were also cashmere macramé columns, hand-made in New York, arduously pieced together by Magdalena in the studio, as close to demi-couture as Hearst could get.

OK, out with the new and in with the old: jackets and coats pieced together from remnants of old kilims, necessarily one of a kind; coats from past collections, scissored apart then recombined, “reworking what we already have”. There were stock leathers given spectacular new life with some artful hand-painting, and more dead stock from those Italian mills, re-tailored into trim navy suits.

If it is truly to confront the future, the fashion industry’s biggest challenge is to reconcile sustainability with the growth that is its Holy Grail. It’s probably impossible. Buffalo Springfield’s ambiguous protest anthem “For What It’s Worth” infiltrated Hearst's soundtrack. “I could have had a business twice the size, and maybe if I was in my 20s, I might have considered that,” she said, “but I’m in my 40s, and it doesn’t make sense. We’re building something to be multi-generational, long-term. You can’t scale luxury quickly. It’s an oxymoron.” And yet, she added, her business grew 35 per cent last year with the same 75 accounts. Which means her business insists on scrutiny.

So look and learn. Even with all the high-pile luxe, Tuesday morning’s show was no bells-and-whistles affair. I did mention thrift and practicality, didn’t I? Hearst showed nothing to scare the horses (unlikely when she herself is an accomplished horsewoman). Smartly tailored pants suits and skirt suits in luxurious fabrics — or black leather — looked more like staples than statements. But the way she presented them spoke volumes. Ever carbon-footprint-conscious, she forewent flowers. Then she laid on a spectacular spread of food. Counter-intuitive? Not really. There was no meat. Her catwalk was lined by bales of paper waste. Her takeaways were eyemasks in recycled cashmere, and appealingly ever-useful notebooks made of 7000 sheets of paper left over from office and studio stationery. Maybe that was Hearst’s way of illuminating the ways in which the oblivious banalities of the everyday could be transfigured by the conscious consumer. A million little things eventually add up to something bigger than the both of us, don’t they? For what it’s worth.