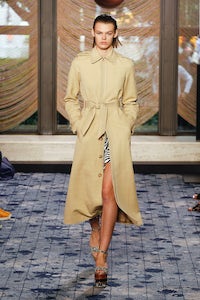 NEW YORK, United States — Before launching her namesake luxury label, Gabriela Hearst ran a contemporary brand for many years, giving her a front row seat to the crisis at the department stores that drive the majority of contemporary sales.

It’s understandable, then, that her new strategy is rooted in pieces that earn their high price tag, convincing consumers slowly but surely that she is worth returning to season upon season. However, impressive fabrication details — the aloe added to white linen to soften the feel; navy merino produced from wool sourced directly from her own ranch — are often difficult to convey on a runway. She did a decent job of it on Tuesday, staging her second-ever show at The Pool, one of the new restaurants in the old Four Seasons space now run by the Major Food Group, also known for its extremely high prices that people willingly — and often happily — pay.

Under a Calder hanging from the ceiling, models filed around the pool in the center of the room wearing Hearst’s meditation on menswear. (She typically starts her collection with a female icon, but this season the inspiration board was covered in photos of Chet Baker, George Best and Winston Churchill.) In reality, this was simply a display of her core strengths, evolved ever so slightly from the previous season. Unlike many womenswear designers, Hearst is not afraid of the suit, and offered several versions, wrapping some blazers like a kimono, rendering others in heavy satin worthy of a city hall wedding. She is also obsessed with bringing additional value to each piece. For instance, resin stone accents — threaded like a necklace onto a one-sleeve crinkled-silk dress or molded into a belt buckle — are treats for the wearer.

This may be an unromantic way to think about fashion, but there is a sumptuousness in Hearst’s work that satisfies. Her challenge will be to sustain that feeling. Hearst’s passion for the product indicates that she is willing to put in the time.