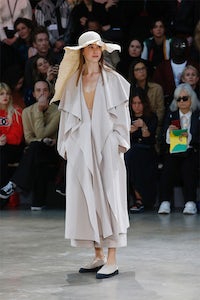 PARIS, France — There is a new womenswear designer at Issey Miyake. His name is Satoshi Kondo and he made his debut with a show directed and choreographed by Miyake's long-time collaborator Daniel Ezralow. The extremely long performance, divided into a series of scenes, was as old-fashioned and out of sync with fashion's current language as it was captivating. Trimming it down to a few key moments — the three dresses descending from above on the models were a joy to behold, and so were the models on skateboards in ballooning duster coats — would have helped in delivering the message. But that was a minor misstep: this was a debut and overdoing things is natural.

Kondo, who has been working with Issey-san on projects such as Homme Plissé, has a focused vision of what he wants Miyake to be: a purveyor of happiness delivered through airy, floaty dressing that has dialogues with the body in engaging ways. No abstruse fabric technologies nor silly silhouettes, even though the fabrics were state of the art, as usual. This made for an interesting start.

There is still a residue of tenderness — in terms of image — from the previous designer that needs to be erased, and the woman should probably be put in focus more, but Kondo seems to possess the creative means to do so. Miyake's own powerful futurism keeps being pillaged by other designers of late. It is time for his own brand to possess it again and push it forward.