The collection was all about uniforms, but the recurrence of holiday clothes only served to confuse things. 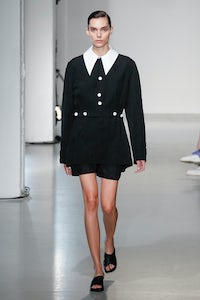 The collection was all about uniforms, but the recurrence of holiday clothes only served to confuse things.

LONDON, United Kingdom — In many ways, Joseph is all about uniforms, or at least the uniform of minimal but tactile clothes that many adopted in the 1990s. The British brand’s Spring/Summer 2018 collection dealt with uniforms more directly, from the Girl Scouts uniform that creative director Louise Trotter wore as a child to city-slicker suits and chambermaid aprons. There was also the recurrence of holiday clothes, a kind of uniform of its own, meant for faraway locations and mindsets, but this only served to confuse things. Crinkly linen designed to looks like it was just unpacked opened the show and coats with the backs cut out were slung around one shoulder as a sarong, but it read like a styling trick instead of genuinely helping to communicate the kind of clothes for which Joseph is renown.

On the men, the slightly boxier tailoring looked great in the way that it broadened the shoulders and captured a balance between slouchy and sharp. The womenswear, however, wasn't as convincing because of how the shoulders, sleeves and lengths were blown out of proportion. Simply put, the oversizing was too oversized. What worked best was the sandy cotton dresses and silk shirts with square pockets and epaulettes, and the long dresses collaged from panels of broderie anglaise, crisp mesh and nightie silk. Neither particularly looked like a holiday uniform, but instead the kind of breezy clothes that could put a fresh spin on your wardrobe next summer.