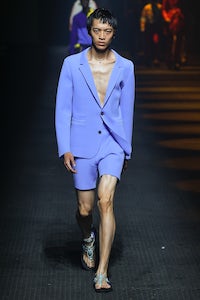 PARIS, France — Kenzo designers Carol Lim and Humberto Leon aren’t the first to invite the public to a runway show, but they may have attracted one of the biggest crowds in fashion history. A whopping 4,000 people registered via Kenzo.com for tickets to enter Paris’ AccorHotels Arena on Sunday, and that in was addition to 1,500 industry people, friends and family invited personally by the house. The concert hall was filled all the way up to the rafters to see Lim and Leon take their final bow before saying goodbye to the LVMH label in July. (They were also treated to a performance by Leon and Lim’s good-and-talented friend Solange, who emerged onto the catwalk halfway through the show to sing a number, and led a contingency of booming horns to close it out.)

While the announcement of who’s on next for Kenzo seems imminent, today was all about Lim and Leon: a celebration of what they achieved in their eight years at the brand, which they transformed from a lovely-but-sleepy ode to founder Kenzō Takada — designed by the talented Antonio Marras — into a high-energy, youth-driven proposition at the forefront of the street style phenomenon. (The fact that embroidered Kenzo sweatshirts can still be seen worn regularly in major metropolises, nearly a decade after they were first released, is a testament to their zeitgeist-capturing abilities.)

Lim and Leon’s earlier collections for the house felt more vital and urgent than those of recent seasons, but today’s effort — an ode to Takada and the Ama, groups of female free divers in Japan known as the “last mermaids”— showed how much they’ve learned about technique and construction over the years. It also re-enforced the aesthetic mark they’ll leave on the label. The liquid-y silk suiting for both men and women, rubberised water shoes, the sparkling organza almost like fish scales: these were all details that were specific to this collection, but they were also signature to Lim and Leon. Their work is quite layered without feeling crafty; instead, it’s sharply engineered, almost futuristic.

And yet, it feels like the right time for them to move on. Leon and Lim have made their Kenzo statement. Now, as the duo are free to focus solely on Opening Ceremony, one hopes they can take some of the energy they brought to Kenzo back to their own label. Wherever this next step takes them, it’s good to know that the fashion industry — and fashion’s fans — will continue to be granted the opportunity to observe their creativity and generosity of spirit.