Bruno Sialelli needs to rewrite his ideas into a truly fresh language instead of continuing to revisit his time at Loewe. 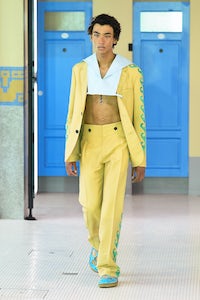 Bruno Sialelli needs to rewrite his ideas into a truly fresh language instead of continuing to revisit his time at Loewe.

PARIS, France — Killing the father, in symbolic terms, is a necessary act in order to sculpt one's own identity. It is a move that requires courage and determination, out of which only good things can arise.

One was reminded of that today at Lanvin, trying to kick out of the mind the fact that, again, it looked like a Loewe show. The odd playfulness, the freewheeling mix of references, the crafty touch and the cramming of meaningful little details all pointed clearly in that direction. This identity flip seems to be just another winning model, in both creative and business terms, nowadays.

Just think of the new Bottega Veneta, where, despite a certain inventiveness, the debt to old Céline is still massive (and that extends from the fashion to the photographic images to the shops). Well, it's just the same at Lanvin. Passing on the Rue du Faubourg Saint-Honorè, the spare and art-like new windows of the Lanvin boutique look, again, like Loewe. Enough with the comparison.

Designer Bruno Sialelli has got lots of talent and quite a fantastic inner world. It is entirely possible, after all, that the identity of the Loewe man was his own personal contribution to the brand. Since he left over there, things have taken another turn — equally charming, but palpably different. In this sense, he remains an original. But repeating the formula won't work for too long. The signatures — a naive sense of decoration, a pervasive lightness of spirit, the refined craftsmanship — are all there, and the collection was actually a lovely exercise in artful summer lightness. Sialelli only needs to reassess the codes into a truly fresh language that does not convey a sense of déjà vu. Otherwise, comparisons with the past will last forever.