The designer’s ‘show on wall’ concept was an irresistibly surreal invitation to surround yourself with Loewe, and a museum-worthy artifact of the Age of Covid. 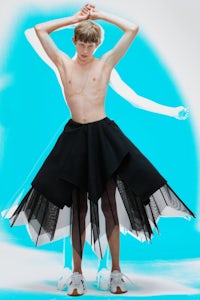 The designer’s ‘show on wall’ concept was an irresistibly surreal invitation to surround yourself with Loewe, and a museum-worthy artifact of the Age of Covid.

Q. Why is Jonathan Anderson the most exciting designer in fashion at the moment?

A. Because he thinks outside the box.

Don’t judge me for the cliché. I mean the box Anderson made during lockdown, when he shrank his collections for both J.W. Anderson and Loewe into neatly packaged formats that ingeniously conveyed the soul and substance of his designs. But his latest presentation for Loewe took fashion out of the box and onto the wall. Literally.

It still arrived encased in a huge, heavy slab of brown cardboard but included in the package were wallpaper (with the glue and brush to hang it) and life-size posters of the new collection suitable for pasting on top. They came in a massive artist’s portfolio dressed with a 1999 image by longtime collaborator Steven Meisel of two girls playing cellos. Also inside the box was sheet music for a 16th century choral piece by the composer Thomas Tallis. It was called Spem in Alium, trans. Hope in Any Other.

The whole thing was an irresistibly surreal invitation to surround yourself with Loewe, in sight, in scent (I forgot to mention the ceramic disc impregnated with Loewe’s new beetroot fragrance) and in sound, although for that you had to go to YouTube where you’d find a film of Kindness, aka English musician Adam Bainbridge, recreating Tallis’s original composition. Judging by the digital response, it looked like there were already people around the world who had taken up the invitation. (I needed more time to perfect my paper-hanging.) 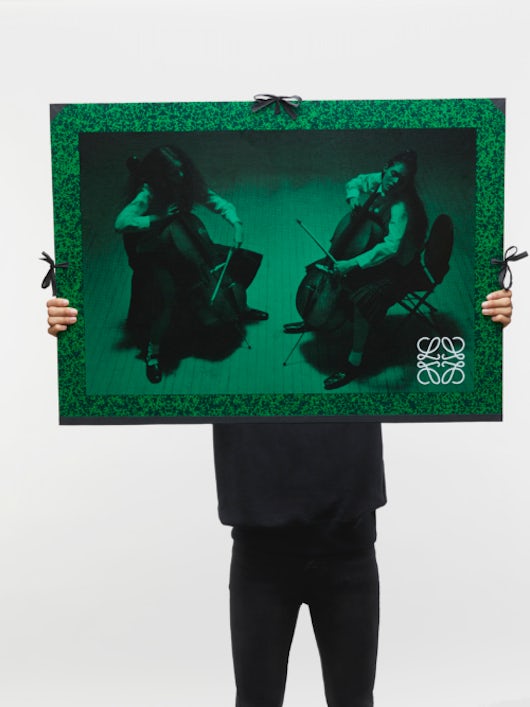 A 1999 image by Steven Meisel, part of Loewe's 'show on the wall' concept for Spring/Summer 2021 | Source: Courtesy Loewe

One of the trials of lockdown has been the isolation, the dislocation from ordinary human contact. This collection was miraculously created remotely, with Zoom calls with a design team that was scattered all over the place. Anderson told them “to just make what you have always wanted to make, doesn’t matter if you’re the knitwear person or the pattern-cutter.” So, equipped with a mannequin and all the time in the world, they set to work. My favourite look, an angelic snow-white concoction of ruffles and angles, was created entirely out of broderie Anglaise by a woman who usually does embroidery. At the same time, everyone, Anderson included, was riven by uncertainty. What happens next? “The collection is full of anxiety,” he observed, “but it’s also billowing and transcendent.”

Last time we talked, Anderson said he’d been delving into Spanish culture, and the billowing sleeves and skirts did indeed echo the Infanta volumes of the classic portraiture in the Prado, Madrid’s magnificent museum. As for the transcendence, he talked about the clothes offering an escape. His signatures were there, but they felt puffed up, like the grandest couture (surely Cristobal Balenciaga must have been as inspired by the Prado.) They defiantly co-opted their space, just as you would imagine things dreamed up by people in confinement might do. Anderson mentioned he’d already been challenged on their wearability, but you could look at them as proposals for a new place for clothes. “Why not have fun trying to work out what it could be?” Anderson wondered. “The unknowingness is so great.”

Ok, the Show on the Wall was a grand concept, but then it turned into an absorbing physical experience. I got all carried away and saw it as an impressive analogy for the creative process, the way pencil marks on paper are alchemized by artists into a dress or a piece of music or even a roll of wallpaper. That was, by the way, designed by Anthea Hamilton, another long-standing collaborator of Anderson’s. He called her “one of the best conceptual artists in Britain.” She also modelled for one of the life-size posters.

“I wanted something that was generous,” Anderson said. “That’s why I wanted Anthea and Steven and Kindness. When I heard what he’d done with the Tallis piece last night, I thought this is why my job is worth it.” Then there were the other photographers Anderson brought in to shoot the still lifes of the clothes and accessories, like burnished talismans. And M/M, the Paris-based design duo who realized the concept so brilliantly. And the designer’s team, overcoming anxiety to make this.

If that role call sounds like cast and crew taking a bow, it’s appropriate, because, said Anderson, “I do feel like I’m part of a play.” In bringing it all together, his role was probably as much impresario as designer. He even sounded a touch uncertain when he talked about his return to the catwalk. “I’m enjoying this moment because the box is a show that keeps giving. It doesn’t have an end to it.” Which surely makes Loewe’s Show on the Wall a perfect museum-worthy artifact of the Age of Covid.