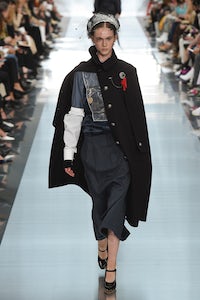 PARIS, France — John Galliano opened his show for Maison Margiela with a nurse. Edith Cavell, he said, executed by the Germans in WWI for helping Allied soldiers escape. He closed the show with Berlin model Leon Dame, vamping ferociously down the runway in black leather and platform jackboots, like a reincarnation of Helmut Berger’s Nazi homme fatale in Luchino Visconti’s histrionic The Damned. That arc, from selfless sacrifice to dangerous decadence, was the surprising reflection of Galliano’s thoughts about the state of the world. In the podcast that accompanied the show, he talked about a breakdown of the moral fibre of society. According to his shownotes, “Stories of hope, heroines and liberation are forgotten as history draws ever closer to repetition.”

In this era, the lessons of the past are overwhelmed by a perpetual digital present. You’d imagine that would be a discombobulating situation for someone like Galliano, who has drawn his greatest inspirations from history. Instead, it seemed to discipline him, quite literally, in the sense that uniforms every which way were the spine of his collection: military, hospital, business, school, scouts. He spoke of “the traditions and the comfort you garner from uniforms”, the long life they have. Like key pieces you might put away for a few years. He said he does that. “Sometimes you’re not ready to wear them.” The exact opposite of fast fashion, in other words, because these clothes have a soul.

That suggested the collection was about the passage of time. There’s a famous 1946 movie called A Matter of Life and Death, a fantasy romance in which the fate of a badly wounded airman, suspended between Earth and the Other World, is decided by a celestial court. The movie has an extraordinary look, shifting between colour and a lustrous monochrome. I thought about it during Galliano’s show, not just because of the ’40s flavour — Marlene Dietrich singing Lili Marlene on a crackly old radio — and the peculiar romance of the clothes (Brief Encounter, too), but also because of the way the designer used trompe l’oeil effects and odd layering to create a shift between worlds, this one with polka dots, that one where the polka dots became holes. Gender was a mere superfluity in this shift.

Galliano is neither nostalgist nor futurist. This show, his most accessible distillation of the evolving manifesto he is shaping around his designs, suggested that “alternate realist” might be a suitable designation.