From Fendi to Jil Sander, tactility took centrestage on the first two days of Milan Fashion Week, but the results were a little icy, reports Angelo Flaccavento.

From Fendi to Jil Sander, tactility took centrestage on the first two days of Milan Fashion Week, but the results were a little icy, reports Angelo Flaccavento.

Despite pandemic-era calls for a “reset,” the Milan fashion week that started on Tuesday seemed to pick up almost exactly where we left off in February 2020, albeit with masks and social distancing measures in place: the same onlookers crowding entrances to show spaces; the same sprints from one end of town to the other; the same delays. Plus ça change, say the French.

As for the clothes, in the first two days of Milan, the action tended towards the heavily handmade, knotted, braided; towards the sensuality of the body sculpted and molded into clothing that is intensely tactile; towards fashion that, following the lesson of Stephen Burrows, dances. But the dancing was a little icy.

At Fendi, Kim Jones based his first physical show for the Roman house on an Antonio Lopez sketch found in the archives. Images of Karl Lagerfeld with Antonio and Anna Piaggi in that extraordinary moment when the magazine Vanity, which Piaggi edited and for which Lopez often illustrated, expressed a wonderfully anachronistic and yet ultra-fresh sensibility, immediately came to my mind as I read the press notes. But this was the storytelling. On the Escher-esque catwalk, apart from the frizzy hair and the swirling prints on silk dresses, things took a different turn.

Jones’ signature is a certain precision: he excels at tailoring if not at flou, tending towards the stiff, which may not be the best match for Fendi’s voluptuousness. Yesterday’s collection felt more smoothed around the edges than the past; a bit softer. Curiously, it was the white tailoring and the forever excellent furs that had a kind of giddy, jolly, silly fluttering. The silky dresses, on the other hand, did not dance at all.

“Tension is an energy” read the opening line of the Jil Sander show notes. Chilled precision has long been the signature of designers Lucie and Luke Meier, but this collection brought movement towards, dare we say, a warmer temperature, a bit closer to real life. The Meiers have recently become parents, which might explain the way they seemed to embrace imperfection over idealisation. The big volumes and delicate colours felt fresh. And yet, one was left longing for some real tension, which might just mean the designers need to break their own Jil Sander mold.

Does high-octane, brazen, unabashed femininity feel out of sync with the post-pandemic times? Perhaps it does, perhaps it doesn’t. It certainly oozes life. Fausto Puglisi has long been the purveyor of such a recipe, following in the footsteps of Gianni Versace. This was true at his namesake label and it’s true too, in his work as the creative director of Roberto Cavalli. This was Puglisi’s first Cavalli catwalk outing and came complete with animal prints, fangs, short skirts and crinolines, as one would expect. But as much as it was predictable, it also looked fresh, mostly for the sturdy sandals that sometimes replaced stilettos and for an almost masculine svelteness. Sex appeal is back with a bang, and all the better for it. At times, the goings were a bit too Versace, but then again wasn’t Cavalli the new Versace back in the day?

Sexy took a tomboy turn at No.21, where knitted slip ons replaced high heels and the walk was fierce, not a strutty sashay. This was Alessandro dell’Acqua charting relatively new territory while sticking to the feathers, bare skin and bandeau tops he has always favoured. At Blumarine, it was the late ‘90s/early ‘00s of TLC and Missy Elliott: part tomboy, part femme fatale, very MTV — a fun exercise in styling but design? Meanwhile, at Etro, the goings took a decidedly young turn, blending together the exoticism and vaguely hippie sensibility at the core of the house with rave culture. The collection had oomph, but it would be interesting to designer Veronica Etro chase this new direction a bit further, cutting old family ties. 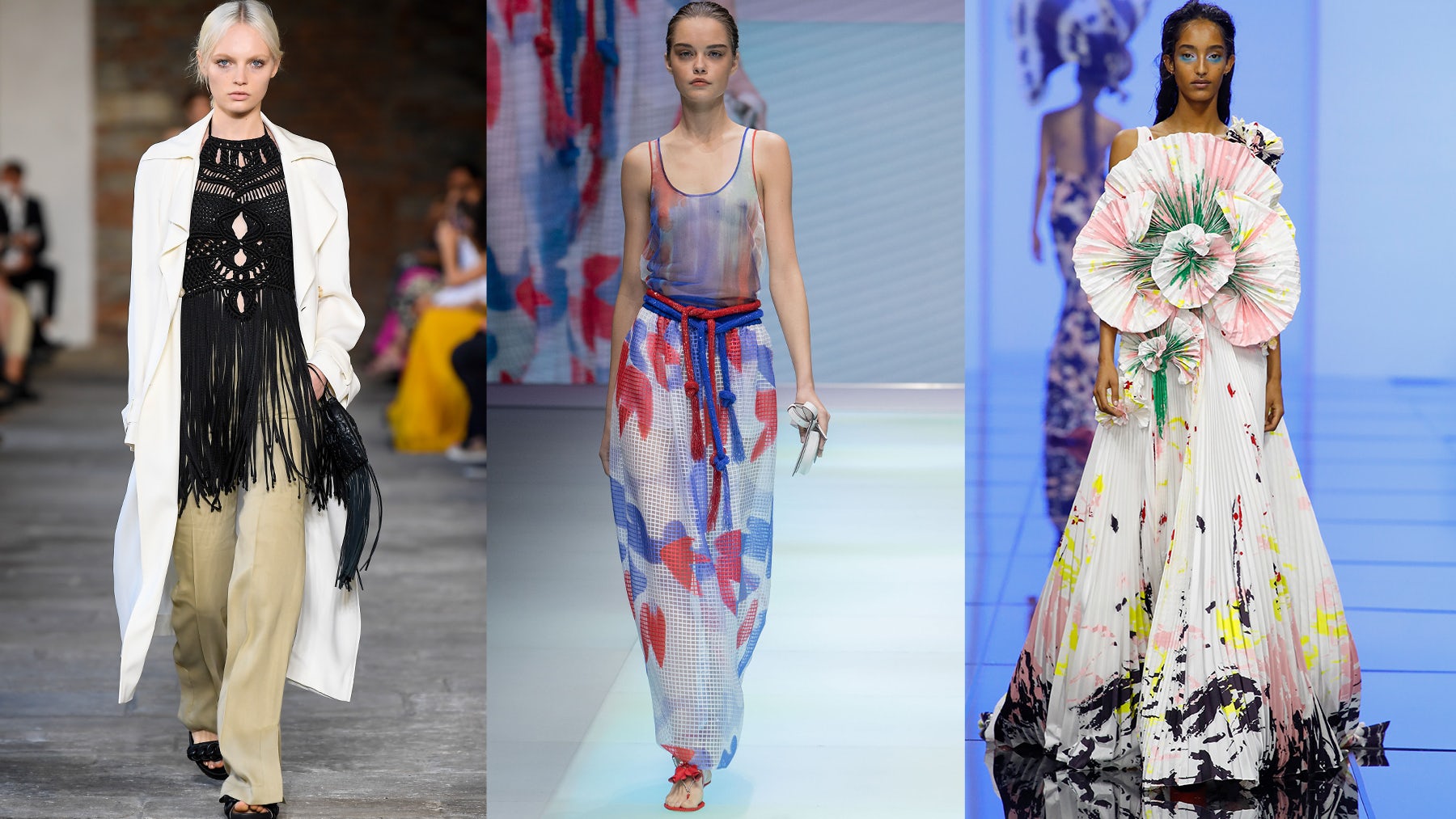 Some of the collections were less easy to digest; a bit all over the place, if the truth be told. Alberta Ferretti was one: from ombré dresses to sequined pants to crocheted dresses, there was a lot on show, but the softly tailored pieces, the liquid dusters and the lovely tabliers would have been enough. At Max Mara the beatnik opening and the bon ton holiday 60s inspiration was quickly poisoned by sporty layering and an attempt at jolly edginess. Emporio Armani celebrated its 40th anniversary with a co-ed show that was not a retrospective but usually long and filled with a wide range of inspirations, held together by the idea of the elsewhere: a journey from the city, to the desert, to India. Outlandish? A bit. Charming? At times. Still, one longs for the muscular and sensual energy Emporio stood for back in the day.

Del Core’s sophomore show, which was inspired by water in its many states, and which grew on the idea of mutant glamour laid last season, also lacked coherence. Del Core has a wonderful atelier, whose work needs to be appreciated up close and the grandiose, smoke-filled production certainly did not help. The designer used to work on special pieces for private clients back in his Gucci days, which explains his focus on the specific item rather than the collection. But the result felt a bit confused, despite some stunning dresses. There is potential at Del Core. It just needs to be better shaped.