NEW YORK, United States — Virgil Abloh doesn’t show his main collection, Off-White, at New York Fashion: Men’s, the three-seasons-young event meant to bring awareness (and hopefully, wholesale orders) to the men’s fashion industry in the US. “I like this dialogue between Off-White and Paris,” Abloh said on Tuesday at the presentation of his arctic-seaman inspired capsule collection. “Off-White is New York. This is where the energy comes from. Each season is a conversation. I have an idea to [do] a fashion show in Nebraska. I don’t have an idea for New York

Many of his fellow American designers agree: Ralph Lauren, 3.1 Phillip Lim, Thom Browne and Calvin Klein all showed abroad with no presence at this week’s event. After staging a big to-do in London, Stuart Vevers and Coach invited editors into their new showroom in Hudson Yards. Billy Reid, an important name in American fashion, abstained from the runway and is instead hosting an event in his hometown of Florence, Alabama, at the end of the summer. Public School showed both its men’s and women’s collections in June, off calendar. Rag & Bone will show men’s and women’s together in September. Duckie Brown, whose ingenuity is much appreciated on the New York menswear scene, pared the season down to one look — rib cage-high trousers, pique polo shirt, tucked in blazer — and distributed a video documenting the process.

With so many of the big names fleeing, the question from the beginning of this already-short week was whether or not there would be another. 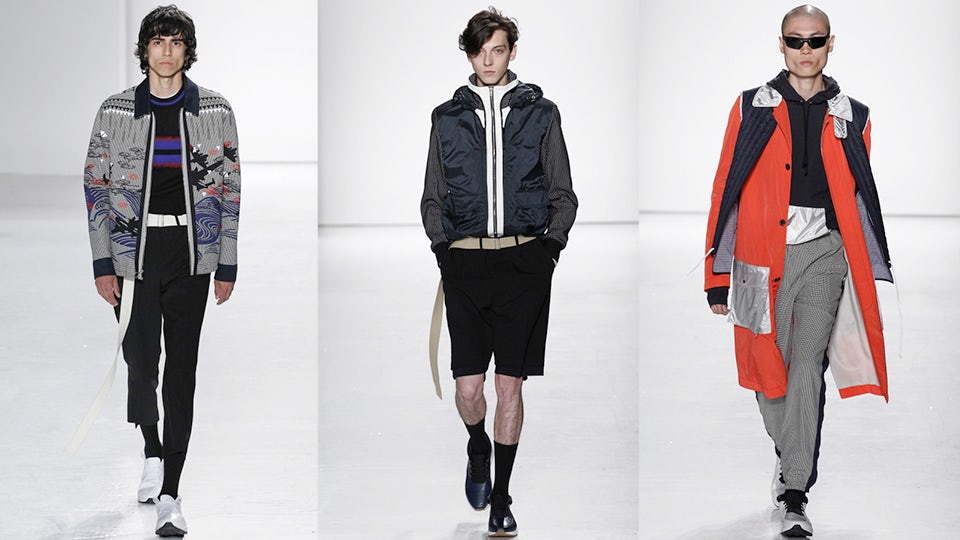 Everyone’s betting that the Belgian-born, New York-based Tim Coppens— whose parachute-fabric tracksuits and neon-rope lacing draws from his 1990s youth — will head to Paris next season. After all, the designer, who just landed a plum gig as executive creative director of Under Armour’s new premium line and was nominated for this year’s ANDAM Prize, is coming into his own. While his energetic Tuesday morning show was an optimal way to kick off the week, he seems ready for the global access and exposure that exhibiting in Europe could provide.

At the other end of the spectrum, Michael Kors doesn’t need Paris, or even a runway. His salon-style presentations offer plenty of insight into his thinking around each collection. This season, he played around with the graphic, geometric concepts that parallel what he’s been doing in women’s. 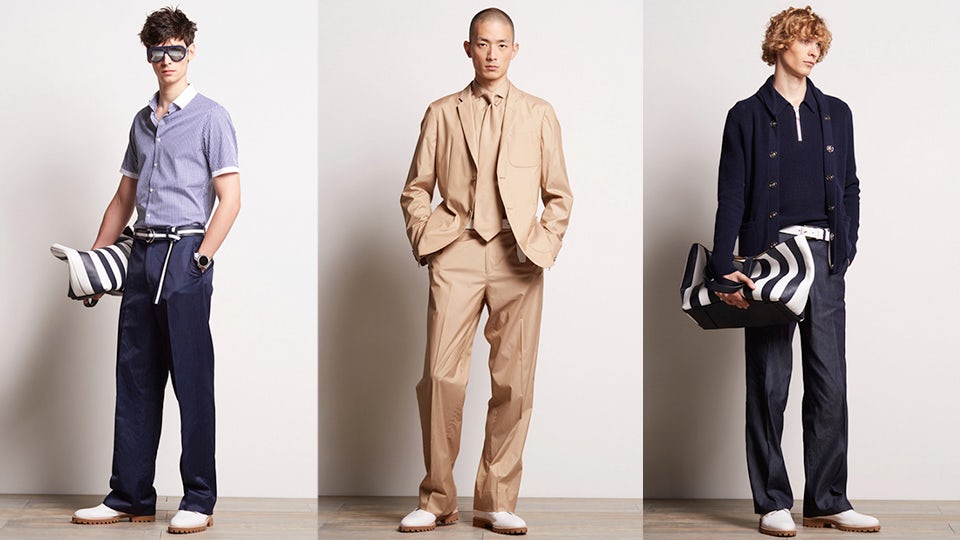 The dot-on-dot short suit popped, but it still feels like Kors is missing a trick with men’s. For instance, an oft-repeated wide-leg pant silhouette felt forced, while a paper-thin poplin suit was brilliant in concept for those living in the sticky New York heat but didn’t hold its shape on the body. The Kors woman is so clear. These clothes don’t yet tell as clear a story about the Kors man.

John Varvatos certainly wins the week’s Most Unique Presentation ribbon, hosting the final show of the season in the basement of the Roxy Hotel (formerly the Tribeca Grand), where guests sat at bar stools and tables watching his predictable, if not unpleasant, collection of Chelsea boots, narrowly double-breasted blazers, and skinny pants go by. 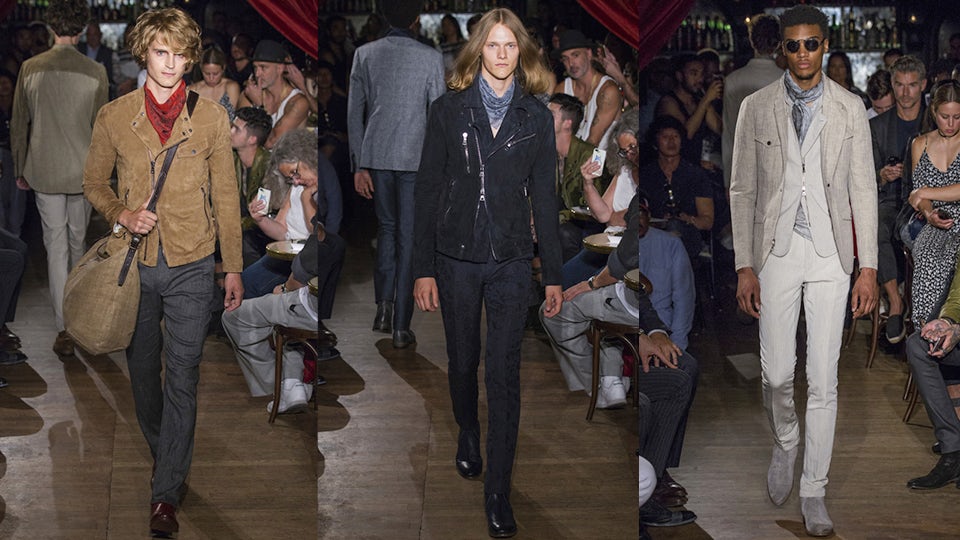 Tommy Hilfiger, the week’s other marquee name, can veer into costume fast with his cartoon-like take on Americana. But this season’s collection held some standout pieces, from the floral anoraks to the textured tennis sweaters and smart preppy details, like colour-blocked tuxedo stripes on chinos and trousers. 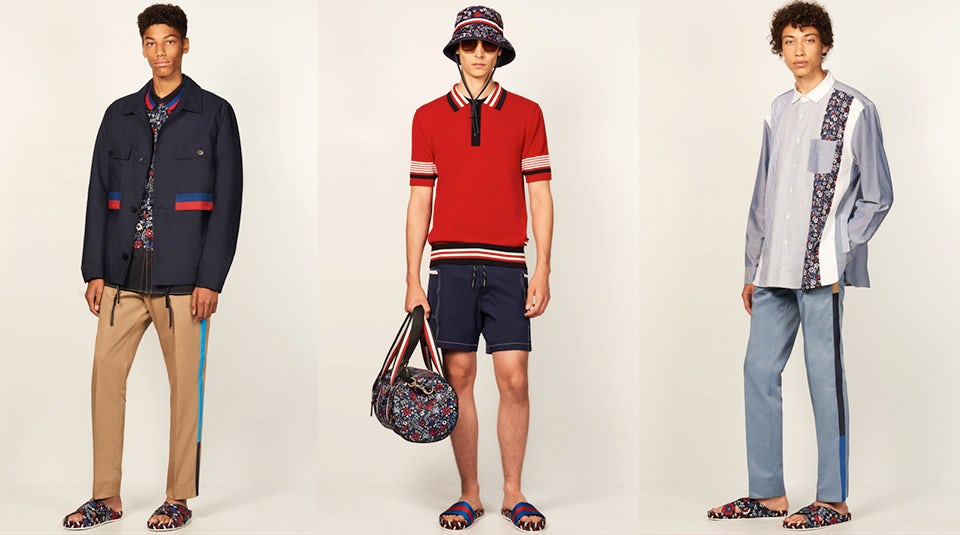 But who’s the next Hilfiger or Varvatos, the brand that can turn into a brand name? The Los Angeles-based designer John Elliott, a favourite among American men’s fashion editors, made a good argument this week that he may well be capable of growing something big. Sure, the standout look was the Moroccan-tile beach towel draped over the shoulders of a French terry sweatshirt and secured with an industrious fanny pack, but what was impressive about this collection was how well proportioned the clothes were, from the basketball shorts to metallic mock neck tee. They had a nice fit, which was a quality difficult to come by this week. 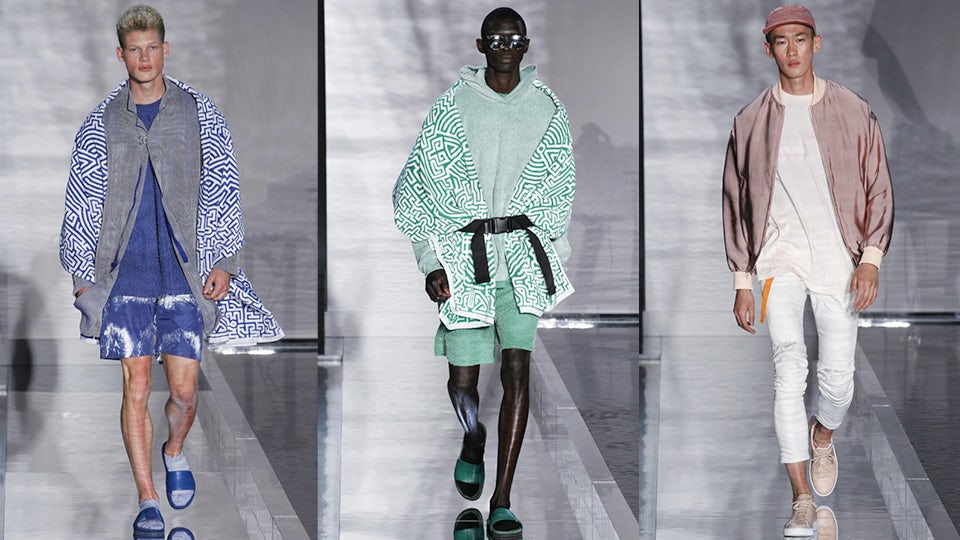 Siki Im, whose high-concept runways are always a draw, turned things down this season, hosting a presentation and showing a series of zen-monk inspired, item-driven looks — including pieces from his denim and performance-running lines — on friends instead of models. “To me, it was really about product this season,” he said. “Everyone expects this fun, weird show from me. But you want to surprise people. It’s not trendy, it’s not insecure.” 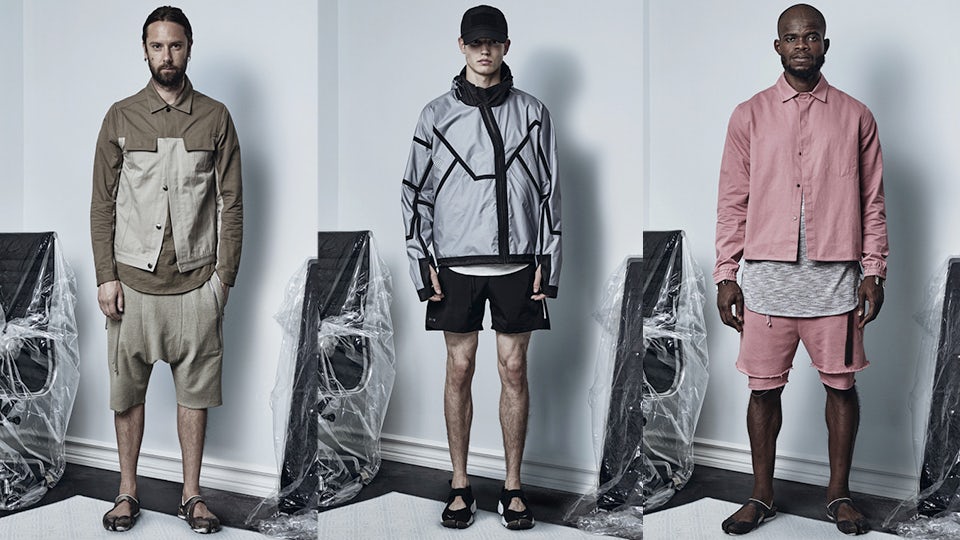 Jeffrey Rüdes, the J. Brand founder, has glided under the radar for the past year since launching his upscale men’s label. He’s focused on blazers and shirting with a certain panache, but the man knows something about pants and this season’s flares were the thing.

Another confident collection came from the Orley clan — Alex, Matthew and Samantha — who challenge themselves every season to explore elements of nostalgia without making retro-feeling clothes. This go around, they were thinking a lot about the work of Detroit artist Mike Kelley and Welcome to the Dollhouse director Todd Solondz, who manage to “compound time,” Alex said. “There are elements from the fifties, the seventies and the nineties, and then you look at it sort of pulled apart and you can’t really tell what era it’s from.” (Stills from the film adaptation of Daniel Clowes’ Ghost World were also on the board.)

The swirling prints, space-dyed knits and Tati-plaid and ginghams in wonderfully peculiar colors all fed into that idea, but the best thing about Orley is the feel and attention paid to the fabrics themselves. For instance, a plaid wool was sourced from a mill in Turin, where the water gives it an extra-dry hand. Done up as a jacket, it felt as good as it looked.

While Orley might be considered a hot ticket, having won the CFDA Swarovski Award for menswear design just this past June, the trio chose to host a small presentation in a modernist Tribeca apartment instead. They plan to do something similar during the women’s shows in September. “Ultimately, we could have done another show, but we’re investing in our women’s collection,” Alex said. (While the label started as a men’s business, the women’s collection is now growing at a faster clip.)

Practicality aside, there’s an admirable restraint in doing things this way. The designers who disappointed this week were the ones who lacked restraint. Despite great potential, Ovadia and Sons have failed to establish their own language: the embroidered palm trees on bomber jackets and leopard-print coats might have been pretty, but they communicated very little. 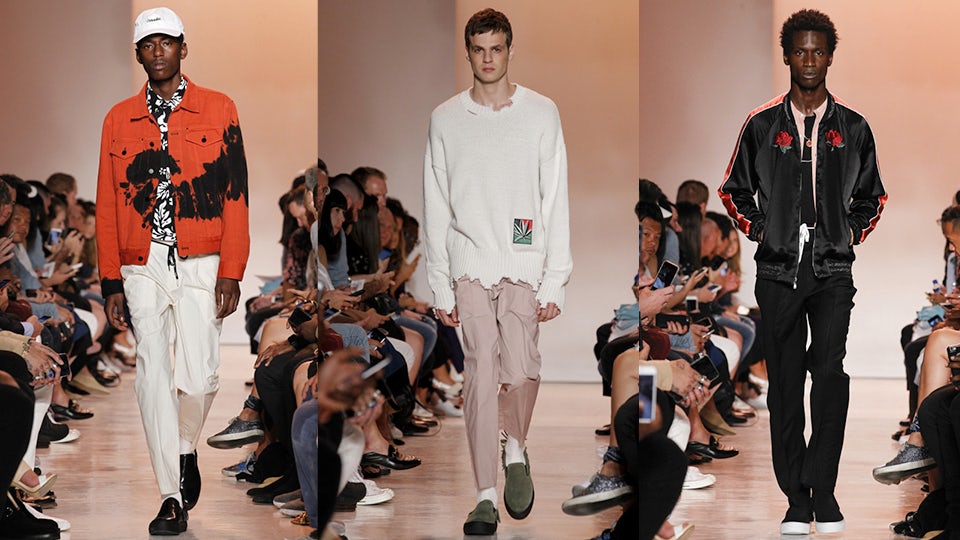 Todd Snyder’s runway packed in a laundry list of collaborations: Timex watches, Champion sweatshirts, New Balance sneakers, Moscot sunglasses, Lotuff bags, and Private White V.C. outerwear mixed with Re/Done Levi’s denim. But Snyder doesn’t say enough about himself to give his vaguely Wes Anderson-inspired track suits and easy Harrington jackets a recognisable aesthetic. Deveaux, the collection from former Carson Street Clothiers owner Matt Breen, was perhaps a bit more cohesive, and very tasteful, with its stone and sand colour palette and hospital-scrub chic. But it’s unclear whether or not the label can offer something new or original. 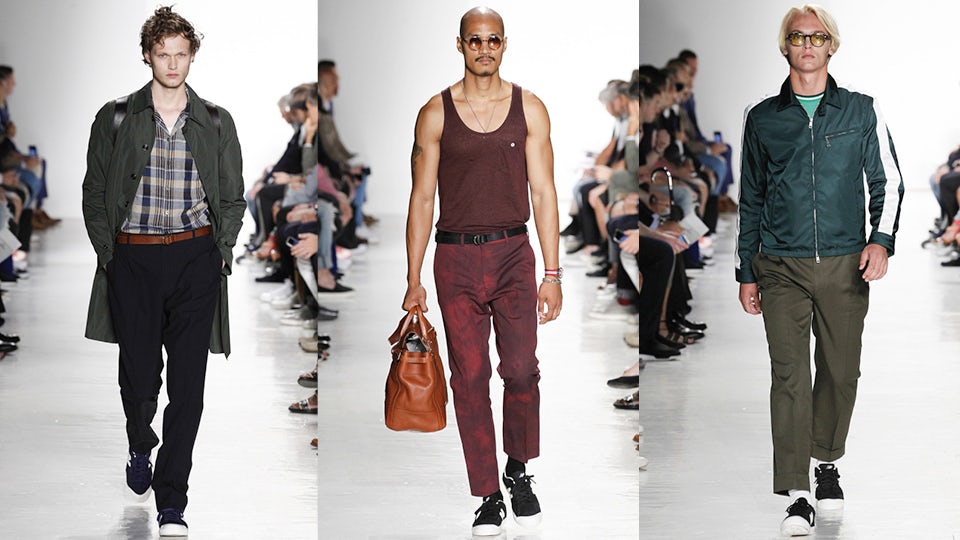 It can all turn into a bit of a drag, a collective eye roll if you let it. But for emerging menswear designers who don’t yet have the budget, or reputation, to show in Europe, New York provides a platform. Promising brands like David Hart, Landlord and Second/Layer all benefit from the exposure they receive by being here. “We had more retailers [this season] and more buyers. Designers have told me firsthand that they are picking up accounts,” said CFDA chief executive Steven Kolb before the start of the Varvatos show. “There’s still an open buy going on. It’s servicing the people who want to be here, and want to be a part of it.”

But forget about all of that for a minute. There was something bigger — and perhaps more important — happening at the New York men's shows this week: a conversation about race, and how the fashion industry's appropriation of black culture thrashes against its exclusionary tendencies.

What was most interesting about this week was the diversity of the audiences. Perhaps it's because the men’s shows are more easily accessible. The more elite and contracted the show, the whiter it be becomes.

“You see black culture in the fashion industry, but they don’t acknowledge it,” said Hannah Stoudemire, a Lanvin retail employee who led a peaceful Black Lives Matter protest outside of the main venue on the first day of the shows. “When Orlando happened, when Paris happened, it was a big discussion at work. Every day, when I was at work, someone died. I’m the only black person at my job, and they didn’t say anything to me.”

Stoudemire’s efforts were recognised, discussed and widely covered by the media, including the CFDA. Let’s hope that dialogue remains open and that more designers choose to engage in it. “My parents are from Ghana and West Africa…. If it’s about race, it’s about me,” Abloh said on Tuesday. “There’s a way to modernise the message, and that’s what I stand for. My dialogue with race might be the most precise thing I’m doing."