PARIS, France —  The haute couture week which closed yesterday in Paris was marked by a poignant return to dressmaking that put sartorial prowess and couture as a service at the fore. Rigour and restraint, the most old-school of qualities, are back: they were apparent everywhere, from Giorgio Armani's titanic opus to Givenchy and Dior's archive-driven affairs to Chanel's melancholia-drenched succession of elongated, somber silhouettes.

No doubt this is a reaction to the streetwear craze that has gripped fashion; the genuine need for elegance as an antidote to the brutality of the times was immediately apparent on the very first day of couture.

Set before the slightly cold, if genuinely heartfelt, homage to Hubert de Givenchy that Clare Waight Keller devised for the revered French house that bears his name — softening up a bit would help her hone a new Givenchy signature — the archly autobiographical Vetements show, inspired by Demna Gvasalia's experience of the Georgian conflict, felt frankly de trop. Too many spikes, too many masks and ultimately too many concessions to a language Gvasalia certainly invented, but which, by now, has become common. The time is ripe for him to test new grounds and prove he is not a one-hit wonder. 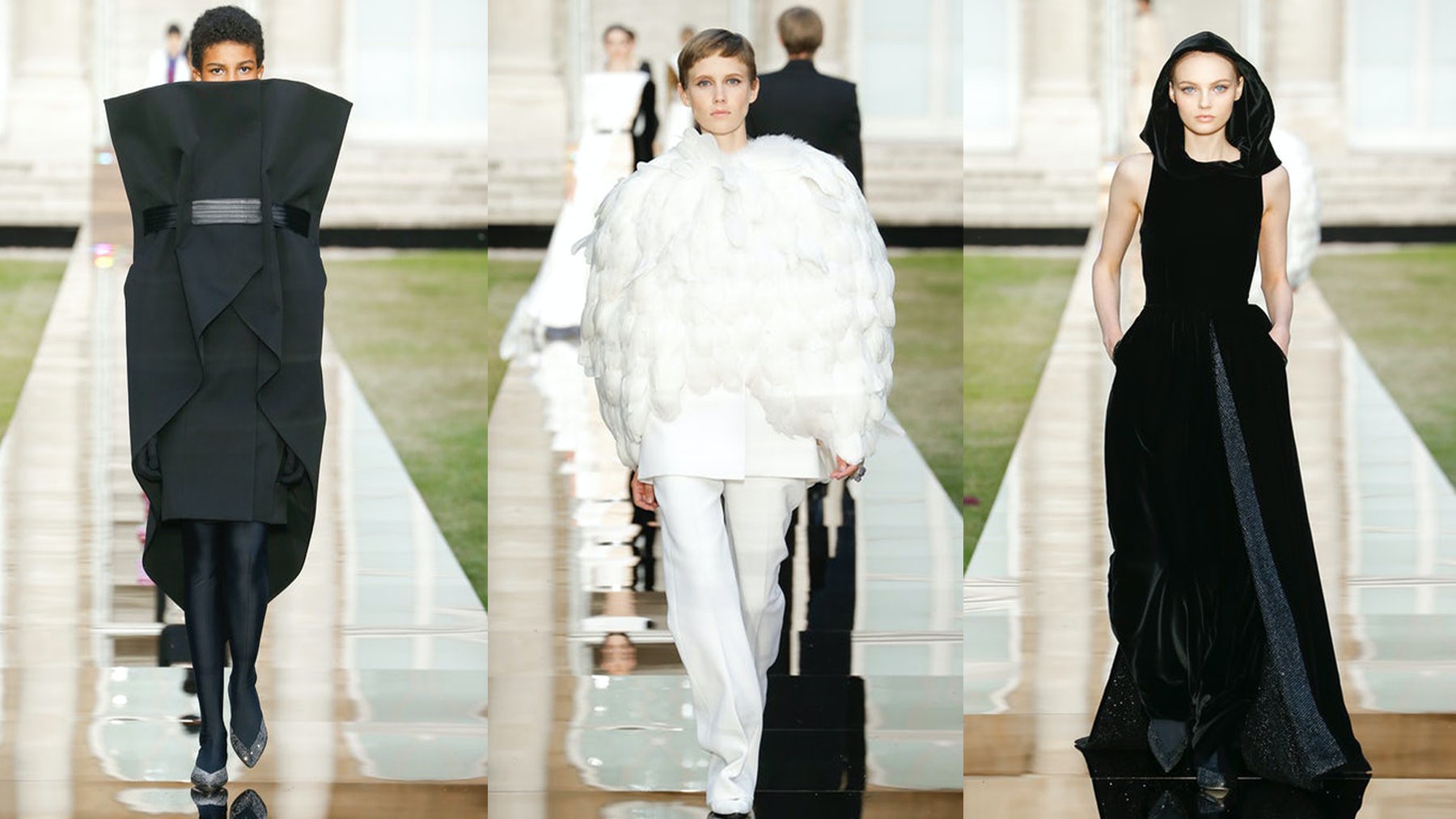 As for the rest, making beautiful dresses that make women look and feel beautiful was the key message of the season. Mr Armani went as far as openly expressing his will to show the younger generation a bit of the prim and proper-ness of the old school. It took him more than ninety outfits to do so, and a tighter editing, maybe doing away with the frilly colours, would have helped. But in sum, it was an uplifting ode to the joys of glamorous restraint at any hour of day.

This is hardly breaking news, however: haute couture was originally all about the custom-made, faultlessly fitted dress that truly shines in daywear, where the craft is all-defining yet almost invisible to the eye; the ballgowns are too easy a terrain to let the imagination run riot.

Yet, in our starved-for-sensation times, the very idea of couture has been wrongly associated with a cliché of dreaminess that is as grandiose as it is pointless. In this sense, the Schiaparelli show, so heavily marked by Katie Grand's pop-cartoonish styling, felt a bit out of sync, the Instagram-friendly take on eccentricity a far cry from Schiap's own brand of rigorous bonkers. 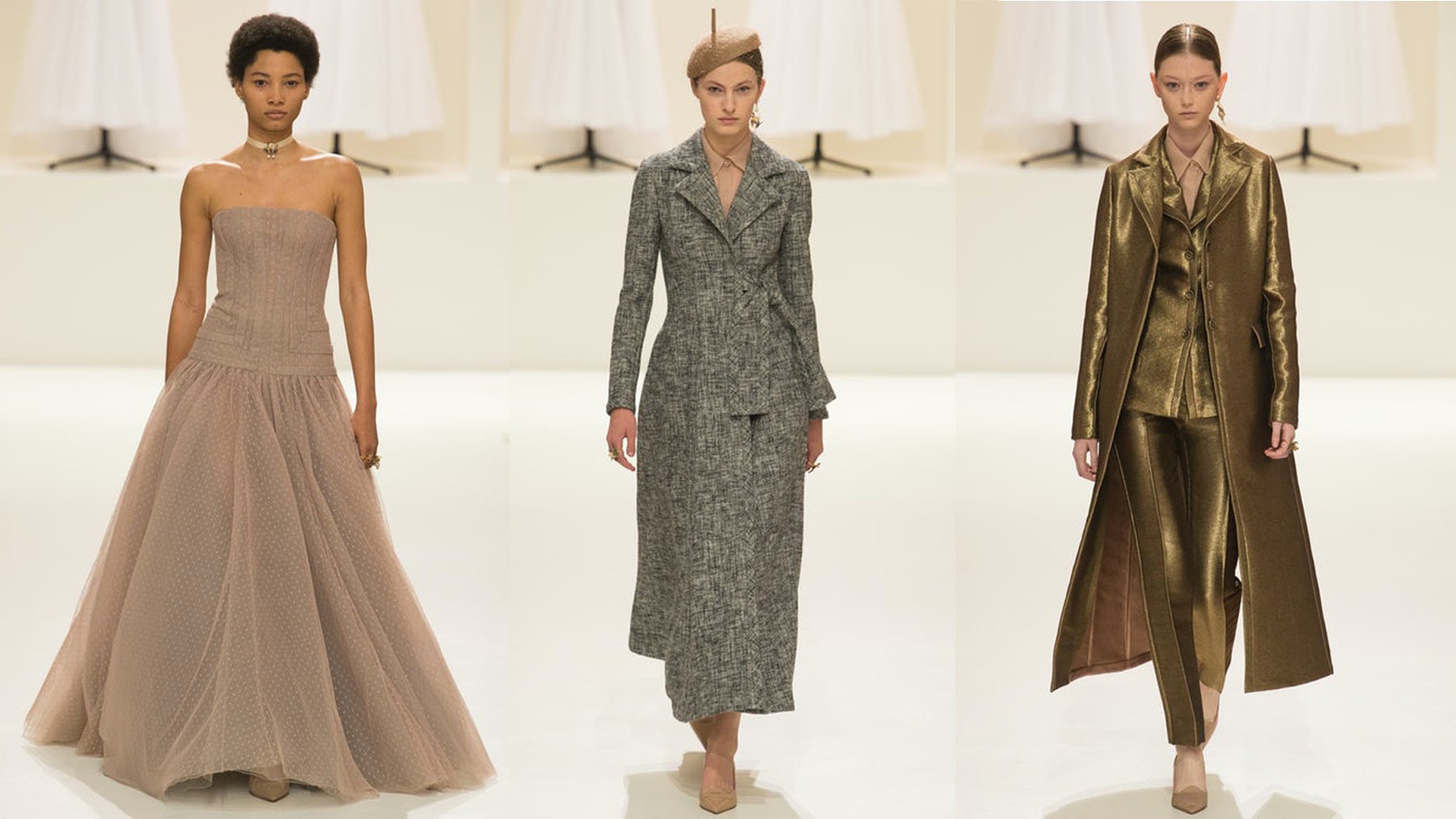 Excess is out. There is a decidedly anti-decoration movement afoot and Maria Grazia Chiuri, who certainly knows how to go overtly decorative, lead the shift at Dior. Devoid of feminist slogans and other such tricks, this was Chiuri's best collection for the house that Christian built: one based on fruitful dialogues with both the ateliers and the archive. It felt repetitive, even a tad boring at times, but the key to this precise and focused outing was that the real value of a couture piece can only be felt when worn, which in today’s era of vulgar image-saturated display is quite a revolutionary concept. This said, choosing to delve into the archives — which are a curse as much as they are a blessing for any designer coming to terms with the bête noire that is heritage — is always a tricky decision: it requires guts and a titanic will to absorb everything only to quickly forget about it. Otherwise, it’s easy to fall into the trap of replica.

And yet, if control is aesthetically great, it’s not media-friendly. While starving for something stricter and more elegant than what we have had so far, we have to acknowledge that rigour can be visually unsatisfying for onlookers. This is to say that sometimes this season’s collections looked a tad tiring, maybe even dull.

Leave it to curator extraordinaire Olivier Saillard to elevate “less is more” to poetic and highly engaging heights with his rather extraordinary collection of very ordinary t-shirts poignantly reconfigured by the knowing hands of a Madame Grès seamstress. It was a celebration of gestures — of the hands that make the pieces, of the body that wears them — that felt progressive because it turned a lack of means into a richness of invention and aura. As the cheapest couture collection ever made, it was proof that manual craft is what makes couture truly valuable and unique. 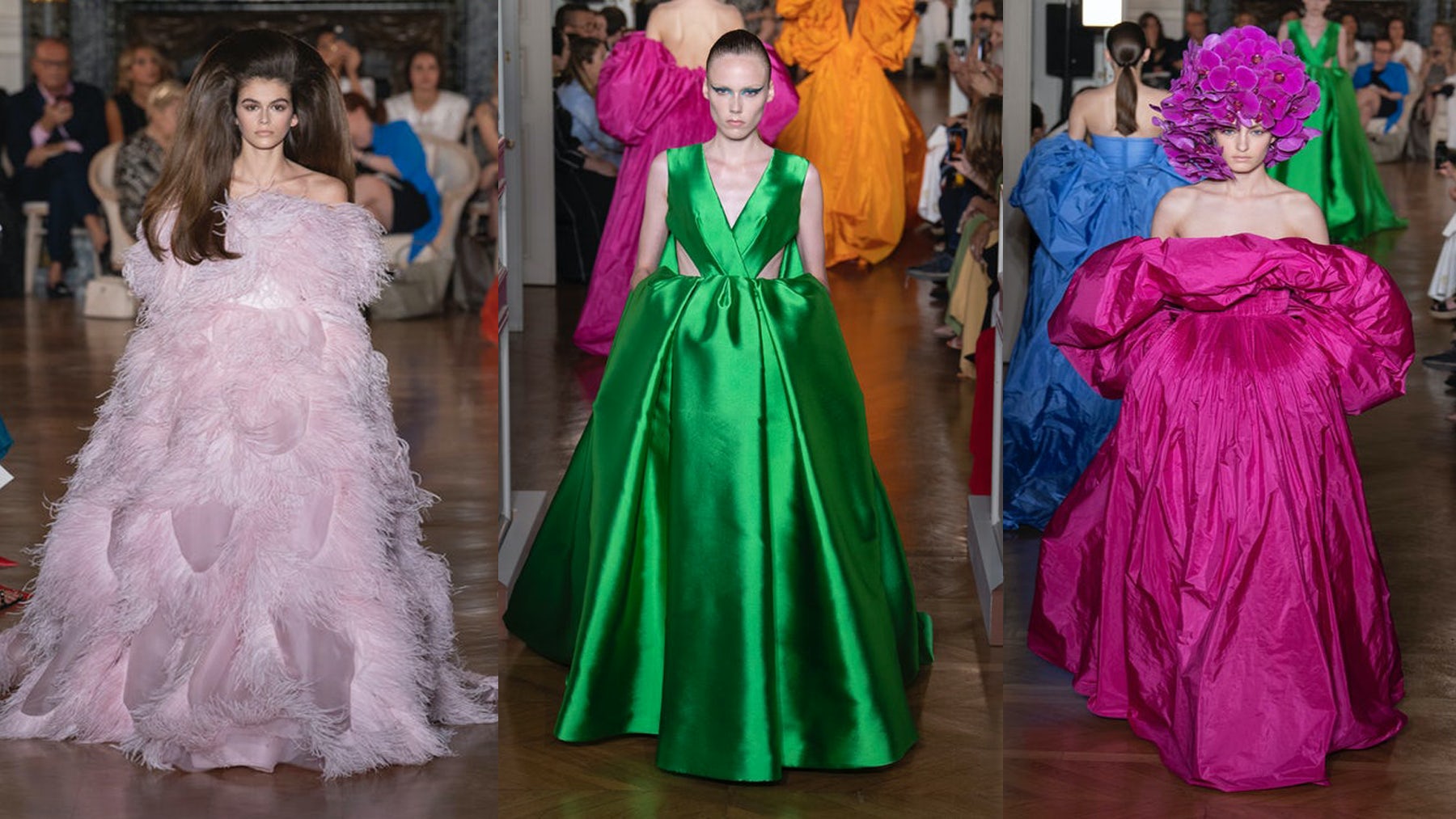 Fendi, too, constantly celebrates the wonders that minds can dream up and hands can execute, pushing craft over the edge of the impossible. But the outing was thwarted by looks that felt a bit forced. When you have such wonders, simple is always the way to go.

Couture's newfound stress on dressmaking also had deeper implications. In the best cases, it took the form of an ongoing dialogue with time, the most ethereal but also the most merciless of entities. Bringing haute couture back to its origins meant a progressive reconsideration and contemporary reconfiguration of its history, which only fearless minds can carry out without falling into the trap of nostalgia. Cue the inimitable outsiders like Pierpaolo Piccioli, whose vision of Valentino couture oozes dreaminess while being rooted in the reality of making clothes, and John Galliano, whose creative mastery is unparalleled.

Piccioli is a skilled colourist and a couture enthusiast who pursues creation as joy and emotion, imparting the very same feelings to his audience. Albeit at times a tad costume-y, this new Valentino collection was a wonderful foray across memories, from Roberto Capucci to Cristobal Balenciaga, from Yves Saint Laurent to Mariano Fortuny, seen through an imaginative filter and rooted in this moment. Sheer beauty was everywhere, lifting the spirits.

John Galliano, meanwhile, delivered the most potent show of the season, connecting dots across eras and silhouettes in wonderfully personal ways. The basis of Galliano's work is immaculately technical: he cuts the perfect everything. Then, he brutalises such sartorial beauty to create mind-blowing looks. He is a prim dressmaker just as much as he is a fearless image-maker. 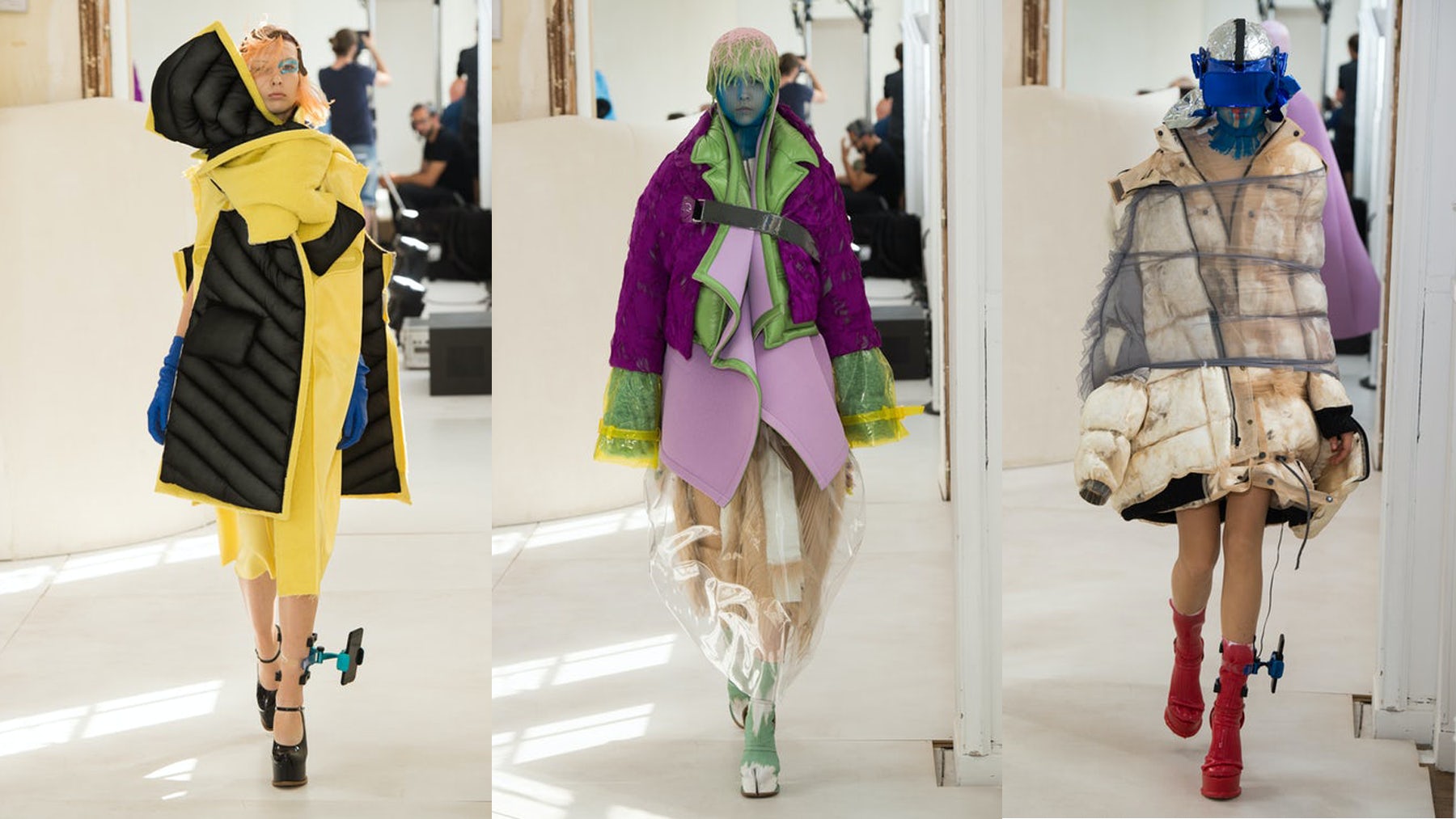 Working on the very Margiela trope of recuperation, Galliano accumulated twenties languors and fifties voluptuousness, brocades and nylon tubes one over the other, and propelled it all in the future with a coating of bright colours and incongruous materials. The galactic neo-baroque vision was a joy to behold: an electric charge that sung an ode to cultural nomadism and celebrated beauty in the oddest and most poetic of ways.

Did it feel too out there, too detached from reality? Most definitely. Yet, it was based on dressmaking. Daydreaming is powerful, as long as you keep your feet on the ground.