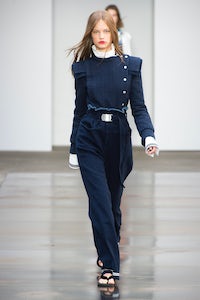 MILAN, Italy — The Philosopy girl is finally growing up, moving past the stage of languid romanticism. In the show notes that accompanied today's outing, Lorenzo Serafini mentioned the late Tina Chow, a woman of daring style and unabashed hedonism, as this season's muse. The inspiration, which he refreshingly referenced in a non-literal way — give or take a jumpsuit and an obi belt — worked to Serafini's advantage. The collection was his best since the installment as creative director.

Sure, there are overlaps between Serafini's work and that of Isabel Marant: they both address the same kind of metropolitan woman, at once a tomboy and girly girl, and quite smart. Yet, Serafini's offer feels fresher right now and not only because flou and lightness are his forte, as well as that of Aeffe, the Alberta Ferretti-owned company that produces Philosophy. Everything felt easy to wear, from the pleated shirt dresses to the sturdy topstitched outerwear, not to mention the floaty white camisoles that appeared on an army of girls the end. Occasionally, there was more than a wink to Kenzo — Chow belonged to that milieu — in the bold intarsia and general sense of East meets West. But it was forgivable. It's ultimately the energy of the girls and ease of their clothes that came across.