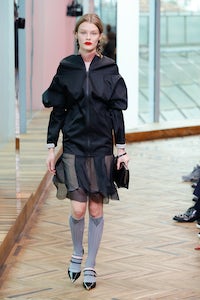 MILAN, Italy — This resort season is air miles madness for the hardy few prepared to chase fashion shows across the globe. Miuccia Prada opted for intelligent restraint. She showed at home, in Milan, but her choice of venue was so extraordinary and the bolt-on – an evening at the Fondazione Prada with Francesco Vezzoli’s new show "TV70" - so stimulating, that I doubt there was a soul who missed the experiential thrill of a far-off land.

Miuccia presented five floors above the original Prada shop in the Galleria Vittorio Emanuele II, one of the world’s grandest – and oldest – malls (150 years-plus, if you’re counting). We looked out over the rusted industrial bones of the dome and the arcade, a vantage point so rare it was enough to make you feel like the Phantom alone in his opera house. And all that metallic, masculine grandiosity seemed to provoke Miuccia to new heights of spiky femininity. Pink and pastel, feathers and crystal, scalloped hems of lace on filmy lingerie, delicate layers of transparency…she’d expressed ambiguous feelings about these traditional tokens of seduction after her collection in February, but the world continues to change at warp speed, and the impulse to co-opt and subvert, always an impetus in Miuccia’s work, can only have grown stronger.

She said she’d been thinking about modernism before she decided to show in the Galleria, a building which was, in its day, the elegant apogee of modernist architecture. Once the venue was chosen, she set out to marry that modernist elegance to the spirit she isolated as its contemporary equivalent in fashion: the lean, active, body-conscious essence of sportswear. But we are talking about Prada here, so the marriage was consummated under a topsheet of tantalizing perversity. Frederic Sanchez’s soundtrack used snippets from Francis Lai’s score for David Hamilton’s 1977 scandal-fest "Bilitis." The soft-focus eroticism of that movie was reflected in a collection which luxuriated in a Lolita-like prettiness. Kate Moss in the first flush of her career came to mind: the feathered headbands, the pigtails, the provokingly sheer layers designed to exercise Prudence McPrude, the Mayoress of Prudie Town. Longtime Prada collaborator James Jean contributed an art nouveau graphic of frolicking bunnies.

It could have been cute, but Miuccia Prada doesn’t do cute. The kick in this collection was the sport. The first look – a black hoodie with Elizabethan sleeves over a sheer black skirt over a white slip and schoolgirl kneesocks with Chicklet and Concetta heels – was a virtual manifesto. Beauty with balls. And so it went on, a fabulously feisty female fuck-you to the world of old white men who go on grabbing at headlines with their self-aggrandising last gasps. There was a moment, not so long ago, when the Prada mojo went AWOL. On Sunday, that moment was a distant memory.

Disclosure: Tim Blanks travelled to Milan as a guest of Prada.