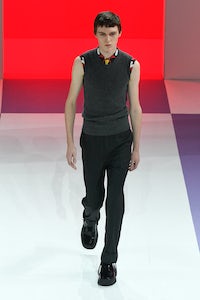 MILAN, Italy — Are things getting better or worse? The headlines are a horror show, but there are any number of other indexes which testify to declines in poverty, hunger, violence and illiteracy around the world. Miuccia Prada was musing on these grounds for optimism following her menswear show on Sunday. While she acknowledged the confused state of the world, she sounded much more positive than she’s been of late. In her own company, she’s seen the human capacity for rapid change over the past year, as sustainability transformed from a ten-cent word to a corporate commitment. And, with this collection, Miuccia insisted her focus was on the dignity of labour, valuing the work that people do to get by in their lives. She has always had a fascination with workwear, but here the idea of the uniform was streamlined with a hint of sophisticated futurism: collar-and-tie formality, but not as we’ve known it. You could say it was a species of power dressing — the jackets with their big, soft shoulders, the narrow trousers tucked into boots — but also the power of confidence, in the sleeveless looks, the expressive colour palette and graphic knits, and the skewed flourishes, like the tiny ruffle on a waistcoat, the lacquered shearlings, the stirrups that anchored wide-cuffed pants to the best next-stage sneaker of the season.

Yes, stirrup pants, beloved of the ’80s. Frederic Sanchez’s soundtrack made it easy to go there. He’d found a live recording of New Order’s first performance in 1980 after they’d changed their name from Joy Division in the wake of Ian Curtis’s suicide. One for the trainspotters. But his choice of music also illuminated the Prada creative process. In 1984, Peter Saville, the art director who essentially designed New Order, used a painting by the surrealist Giorgio de Chirico as artwork for a New Order 12”. De Chirico is famous for his shadow-struck arcades and deserted piazzi. The set for the Prada show on Sunday recreated one such piazza, centred on a monumental statue, another de Chirico signature. Here, it was a man on horseback, most often a tribute to triumphalism and therefore no longer politically correct in the current climate, Miuccia pointed out. So the triumphalism was defused. This statue was assembled from a flatpack, like a toy. A surreal monument to a more temperate kind of hero.

That was the man Miuccia said she had in mind, an everyday exemplar. She wanted to give him the best possible wardrobe for his work. “I’m getting older, I can give advice,” she chuckled. But she also seemed to suggest it was her way of saying thank you to all the everyday heroes “who do well in their job with care, with intelligence, with culture”, and who, when we encounter them, restore our faith in humanity.