The designer’s Spring 2021 collection for his namesake label, the first to include womenswear, offered an ominous meditation on coming of age in the time of Covid-19. 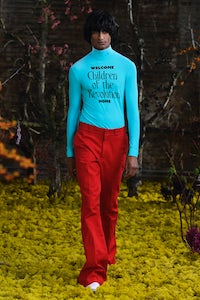 The designer’s Spring 2021 collection for his namesake label, the first to include womenswear, offered an ominous meditation on coming of age in the time of Covid-19.

The debut of Raf Simons’ Spring 2021 collection “Teenage Dreams” was accompanied by a 17-minute film he directed and a press release that listed some movies and a few Joy Division songs. Could we safely assume that the titles on the list were fuel for Simons’ own teenage dreams? He has often used his past as visual fodder, anything from childhood photos to album covers of favourite bands, memories providing momentum to move forward. There was some of that in his new collection. Childhood photos, I mean. Another assumption: they were of the people around him, friends, colleagues, but such is our twisted world that there was also a hint of the macabre because we’re so used to seeing such images with reports of missing children, or even “I lost my son/daughter to a cult” shock/horror shit.

Horror is one of Simons’ favourite genres. Half of the titles on that list I mentioned were horror or horror-adjacent, from obvious screamfests like “The People Under the Stairs” and “Alien” to the subtle psychological disturbance of “Picnic at Hanging Rock” and the more insidiously unsettling “Annihilation.” In that movie, a handful of scientists investigating a quarantined zone in which Nature is steadily mutating under the influence of an alien force called the Shimmer are themselves eventually consumed. Lichen plays a major role. In Raf’s movie, his young cast crawl through a hole in a brick wall into a courtyard which is thickly carpeted with yellow lichen. There are bare trees sprouting bunches of berries, and strange-looking flowers. Maybe it’s Spring, but not as we recognise it.

I’m dwelling on “Annihilation” because it has elements that are obviously applicable to the current global situation. So does “Teenage Dreams,” both the collection and the film. The media initially focused on the pandemic’s impact on the elderly, but that focus has switched to the disastrous effects it is having on the young. There is sympathy for their lost opportunities, but they have also been demonised as super-spreaders, compounding their isolation, breeding disaffection. They’re the future but they’ve been cast as a danger to the present. Maybe it has always been so. Rebellious youth, y'know.

Youth as a state of mind – idealistic and hopeful, disaffected and misunderstood, beautiful and doomed – has been the default inspiration for Simons’ career in fashion, so it made sense that a collection which introduced womenswear to his own label for the first time should also provide him with a broader forum in which to meditate on his obsession. He tagged his boys and girls Children of the Revolution. “Join Us” urged the badge some were wearing. “Welcome Home” read the first model’s turtleneck. Raf is home now, back in Antwerp, but also settling in at Prada, which you could construe as a sort of spiritual home. But I was thinking he was actually welcoming his boys and girls home, to their safe space in that lichen-carpeted courtyard. They crawled through the wall into their own Wonderland. Or was it their Underworld?

And Simons gave them clothes to feel safe: oversize knitwear, substantial coats, elongated gilets. He layered a T-shirt, a vest, a hoodie over sleeveless leather jackets, youth super-imposed on adulthood. He made the girls elegant in long satin skirts, or shifts draped and pinned to one side. He introduced a psychedelic Op/Pop swirling pattern, an echo of the Sixties, another era when the young were demonised as a threat. Capes and a printed poncho also reminded me of that time, any excuse to recall the movie “Performance” with its dazzling depiction of hermetic hippiedom. Like the kids in their courtyard. (Raf had the equally trippy “Zabriskie Point” on his list.)

But the idyllic altered states of “Performance” and “Zabriskie Point” end in catastrophe, and there is a steadily building sense of the ominous in “Teenage Dreams.” The film is lit in an eerie, post-nuclear purple, the soundscape by Antwerp composer Senjan Jansen (who has also made music for Dries Van Noten and Haider Ackermann) is an alien pulse with the occasional dislocated lurch. Towards the end, a young couple stand outside a locked, dark window. They beg for entry. The window is opened and they are helped out of the purple light and into the darkness. Remember that exquisite vampire movie “Let the Right One In”? You must invite the contagion in. As a cautionary reminder, “Teenage Dreams” ends with a reassurance that all health protocols were observed in the production of the film.

The ominous something or other in Simons’ work is a sense of melancholy. Inevitable, really, when you are fascinated by transient youth, born to die. In some scenes, his kids float in nets. Are they freed from gravity, or are they just trapped? Teenage dreams seem like very dark places to be, especially at the moment. And yet, children of the revolution… among the many other things it is, Covid-19 is a revolution. So here are its children, ripe for A (if not The) Future.

And here I was looking for an upbeat closer, thinking of Marc Bolan’s triumphant glam anthem “Children of the Revolution,” and remembering that he too wrote a song called “Teenage Dream.” So I thought there might be an optimistic line I could lift, but I’ll be damned if the first lyric I read wasn’t, “The curfew comes at the crack of night.” There is no such thing as coincidence.