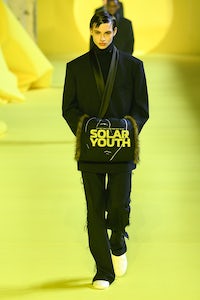 PARIS, France — I was wondering if the revolutionary TV series “Watchmen” would insinuate itself into fashion this season, and there it was at the end of Raf Simons’s show late Monday, in the form of the piano version of “Life on Mars?” which plays as Jean Smart’s character FBI agent Laurie Blake gazes heavenwards in search of a sign from superman Doctor Manhattan, allegedly ensconced on Mars. A poignant moment on TV, it was evidently emotionally loaded for Simons and his young team as well. Tears were shed.

But it’s an emotional time generally for Simons. A transitional time. “We are changing a lot of the process of how we work in the Antwerp studio,” he said on Monday. He’s entrusted his right hand Bianca Luzi to create a kind of artisanal support studio. First hire? “A genius pattern-maker who just graduated from the Academy of Fine Arts.” It’s helping Simons look at his own past through new eyes. There were a number of references to earlier fascinations – the sartorial formality, the huge coats and capes, the DIY sloganeering and, always, his debt to Martin Margiela - but he was taken with the idea of transformation, “transforming my own clothes to something else, reading something through a veil or a layer, compressing a silhouette in a different way.” He did it with plastic.

While the world is burning and drowning, it’s also choking on plastic. Simons took the view that it was possible to transform a thoroughly demonised throw away into something that was meaningful enough that people would want to keep it. Making the prosaic precious — it’s an elevated solution to waste generation. Simons turned plastic into sartorial pieces. (He added that he was also thinking of Margiela’s Autumn/Winter 1998 show, which employed a similar idea decades before the plastic armageddon.)

But this was hardly Raf Simons recast as climate change activist. One model had his hands tucked into a muff bearing the words SOLAR YOUTH. IRL, it’s a programme with a strong environmental bent that supports children in three high-poverty neighbourhoods in New Haven. Simons insisted that was sheer coincidence. “We hear so much about how damaging the sun is but I want to look at its beautiful aspects, its energy, its light.” The future he had on his mind was less literal than a world degraded by climate crisis and social inequality. The futuristic film noir of “Bladerunner” was more to his point. Its soundtrack throbbed through the sound system.

And yet there was something here that felt like a response to current events. Take that SOLAR YOUTH muff, or the one that followed it, branded ARRIVAL (a more recent sci-fi spectacular). Or consider the stoles and capes that swaddled Raf’s boys. “In a moment when things get tense — as they are in Belgium, the US, Italy, Germany — I’m always creating a cocoon. I used to do capes in the past but now I was thinking how they could be futuristic and also sartorial, not hippie blanket things.” So Simons created cosy columns, which zipped open for ease. Some of them even zipped themselves into sweaters. The proportions of coats and jackets also promised enveloping comfort.

There was a time when Simons was the most confrontational of designers, sharpening an edge that sliced menswear wide open. Youth fearlessly theorises. When you’ve lived a little. been knocked around a bit, the theory surrenders to the voice of experience. That’s where Simons is now. When he talked about “Watchmen”, it was the humanising of the superheroes that he liked the most. They bleed, they fuck, they cry. They might even wear Raf Simons if they knew where to buy it.