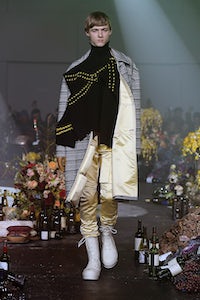 NEW YORK, United States — Like an anthropologist of the arcane, Raf Simons collects cults. His entire career has been shaped by the inspiration he’s drawn from musicians, artists, designers, filmmakers whose pushing beyond the possible has won them often irrationally ardent fanbases. And Simons is a fan. It’s what adds the emotional backbone to his work. And it’s why only he could use one of the most harrowing films ever made about heroin addiction as the starting point for his latest collection.

Released in 1981, Christiane F. told the true story of a young girl who was swallowed by the hard drug culture that evolved around Berlin’s Bahnhof Zoo train station in the late 1970s. It was the Berlin of Bowie and the Wall and runaways living recklessly on the edge and, for all its cautionary elements, there’s a clammy beautiful-and-damned glamour to the movie, culminating in a performance by Bowie himself. Simons first encountered Christiane F. in high school, where it was shown and discussed as part of the curriculum. He credits it with putting him off drugs forever, but at the same time, the movie took such a hold on him that, the first time he went to Berlin, he insisted on being taken straight to Bahnhof Zoo. (If you think that sounds unduly obsessive, I did exactly the same thing. And there were many more of us).

It was Natja-Brunckhorst-as-Christiane’s face on the collection Simons showed, but it wasn’t only Christiane’s bad habit that dictated the textual element. Yes, the patches applied to the clothes said DRUGS, but that was from the artwork of the cover of the book of the play of the same name (written by Cookie Mueller and Glenn O’Brien in the mid-1980s…see, I told you Simons was an anthropologist of the arcane). Other patches carried abbreviations familiar to the chemical cognoscenti — LSD, XTC, GHB, 2C-B — each of them emblematic of a particular subculture’s appetites.

Minus the mercifully clarifying shownotes, it was easy to imagine an audience confused by Simons’s insistence on such a touchpaper subtext. Why all the overt drug references, especially with America helpless in the face of an opioid-induced health crisis? “It’s important to say what you need to say,” Simons said after the show. “There is so much that people are hiding.” Using the medium of clothing to make such a point about such a subject would seem like a challenge too far, but that was just one layer in the collection. The story the designer wanted to tell was broader than just-say-no. He did, after all, choose the title Youth in Motion: young minds open to all sorts of experiences, good and bad.

The set did not say “young”. Rather, it looked like a Old Master painting of the morning after a bacchanal: bottles of wine, glasses half full, mountains of cheese and chocolate, flowers spilling everywhere, fruit mounded on the catwalk, with centrepieces artfully composed of long tendrils of lemon peel. The luxuriance was decadent. No wonder decay was already in the air (the lemon peel piquant with the onset of rot). A classical string quartet played on Michel Gaubert’s soundtrack until it was deposed by hard dance music. His Old Master tableau was raked by rave-y lasers. Simons has always toyed with such juxtapositions. A peculiar past-meets-future historicism infects his work. Gamekeeper begets bladerunner. Here, his signature oversized outerwear (once again, superb coats) contrasted with the satin-y luxe of slim tailoring, both draped in disembodied knitwear, half-sweaters dangling like breastplates. Utilitarian rubber boots and vinyl opera gloves were appropriately contrasting accessories.

Simons’s fascination with decadence is partly a preoccupation he shares with of a lot of his generation. But there is something about the current moment that makes it seem less of an indulgence than it once was. That meant you could look at Youth in Motion, with its difficult, unlikely inspirations, and see a profound melancholy. Something lost. Optimism perhaps. And that was a point that Simons was able to make through the clothes he presented.