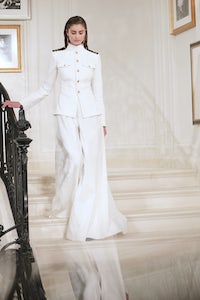 NEW YORK, United States — Mr Ralph Lauren knows a thing or two about staging meaningful experiences. See his restaurants, most notably the forever-booked Polo Bar in New York City with its mahogany wood panelling and tasty popovers. The Lauren family actually eats there, so if you’re lucky, you are not only buying into the idea of the lifestyle the brand conjures up, but actually living it with them. Ralph’s Cafe, a collection of retro-tinged coffee shops tucked inside some its retail stores, is similarly charming — no reservations required.

So, after last-season’s blowout 50th anniversary extravaganza in Central Park, which managed to flick some of the dust off the brand’s storied past, Lauren chose to invite the industry into his Madison Avenue women’s store where he recently opened a Ralph’s Cafe. Comfy juniper-green booths were installed across the first floor, where guests sat in clusters of three or four, sliding their forks into egg-white frittatas and sipping on macchiatos.

Genuine supermodels, including Carolyn Murphy and Joan Smalls, glided past to the tune of “Puttin' On the Ritz,” twirling and posing in a style reminiscent of a time when the runway offered more than a fleeting moment to register the what was going up and down them.

The clothes deserved a close up. They were elegant, rendered in a black, gold and white palette and reined in by sculpted gold jewellery and statement belts. Playful sequined pieces like a black polo shirtdress and a gold military cape managed to register more fashion than kitsch. Yet the same could not be said of the Navel Academy whites that opened the show. And ultimately the collection felt like a regression, with its Muzak soundtrack and careful theme.

What made last season so thrilling was not only the venue — Central Park’s Bethesda Terrace — and the pomp that came with it, but also the way it was communicated through music and styling. Ralph Lauren, the company, has had a few promising quarters, and is positioned to capitalise on the fashion winds moving in its direction. Indeed, there’s some evidence that young consumers want to love the brand again — the excitement around its collaboration with skater label Palace was palpable. But it needs to figure out a way to use that energy to make these sort of intimate experiences feel relevant again. It was lovely, yes, but Ralph Lauren can, and should be, far more than lovely.