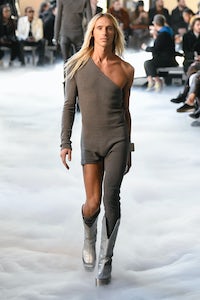 PARIS, France — Appearances to the contrary, Rick Owens was always self-conscious about showing off. Personal behaviour was reality, performance felt false to him. He laughs when he thinks about it now, as the plunging neckline of his tee reveals massive pecs as sculpted as Olympian marble. “I’m the Dolly Parton of fashion.” He laughs some more. This is a new Rick. Five years ago, he’d never have displayed himself so overtly. But age is a great liberator. “You don’t have that much to lose anymore,” he claims. “You can be a bit more reckless.” He’s 58, by the way. Still decades away from Shady Pines Retirement Village.

The point is, Owens has made his peace with performance. “It’s playing,” he says. “And done right, it can be very sincere and authentic. To feel comfortable in your own skin is joyous.” He spent New Year’s Eve in St Petersburg watching radical young conductor Teodor Currentzis, who gave his Goth-y all while he was wielding the baton. It was bliss for Owens. A similar spirit infused his own show on Thursday. He even called it Performa (after the performance art biennial that happens in New York). “Thinking about fashion, I want to simplify, make bold gestures, strip things away,” Owens explained earlier in the day. “I like to see skin. The graphicness of exposed flesh with clothes interests me a lot now.”

All of that contributed to what he described as “a heavy dose of theatre” in the new collection. He agreed there might be a confrontational edge to his new mood, “probably because there’s so much bigotry in the world, and bigotry is my biggest bête noire.” But it took him to a wonderful place: David Bowie wearing a glittery Kansai Yamamoto bodystocking on his Aladdin Sane tour in 1973. Owens duplicated it precisely — the one bare arm, the one bare leg — except he did it in grey felted cashmere, as though it had been remade by Joseph Beuys, another of his favourite artists. “I wanted to take Kansai and mute it, make it a Rick Owens thing.” He borrowed another Kansai/Bowie touch, the geometric tracery on one-legged looks a little further down the line. “I love the exuberance of the ’70s, the overt sexuality in a campy way.” Maybe too overt for these times. The night before, Owens found himself wondering if this was the sleaziest show he’d ever done. There was a slight problem with pubic hair, which he felt was a distraction. It was quickly remedied by a little light grooming.

His appetite for revelation also found expression in the collection’s vinyl pieces, as artfully crafted as the outerwear that rules his shows with increasingly imperial magnificence. The see-through was subtle compared to shoulders that soared skywards, Joan Crawford in excelsis. Never forget that this man is a connoisseur of camp. “A cynic’s way of embracing sentimentality”, he called it. “It’s being in touch with your emotions, it’s being a drama queen.” Rick agreed he’s one too, "but with added control and self-awareness". Anyway, there were some gorgeous shearlings if you didn’t fancy going the full Joan.

Owens said he’s over being maudlin or nihilistic. Here, there was joy, and there was defiance. Something else to take away, aside from the bold gestures, was the electric blue in satin pyjamas and sensational motocross leathers. “Blue, blue, electric blue, that’s the colour of my room where I will live,” Rick reeled off the lyrics of Bowie’s “Sound and Vision”. No particular reason. Sounded good. But I’m taking the view that Rick Owens is in such a good place he’ll help us find the blue sky behind the gathering stormclouds.