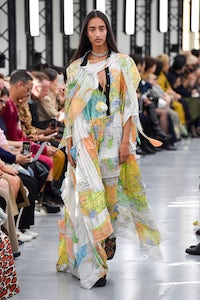 PARIS, France — Chitose Abe and her creative director Daisuke Gemma are peerless pop/cultural hunter-gatherers. That’s because they’re fans first. Proof lay in the way a record sleeve from 1978 sparked the new Sacai collection. Funkadelic’s One Nation Under a Groove is one of the most joyful message songs of all time, and it fired an uplifting show from Abe. Even better: it took place in front of Mr George Clinton himself, the Captain of the P-Funk Mothership. Now 78, he said the last thing he expected was to hear his music soundtracking a fashion show in Paris. But it was the perfect accompaniment to Abe’s own message this season.

It was obvious from the first look, a colourful concatenation of map-printed scarves. Round Mona Tougaard’s neck swung a small globe. “I really wanted a message of harmony and unity,” Abe said. “It’s a reaction to division.” The show closed with a negative image of the same look on Kaia Gerber, this time with the world in black and white. The designer insisted there was no veiled meaning in the monochrome. It was simply another option.

But the collection promoted an inescapable take on unity in an unexpected fashion. The hybrid has always been Sacai’s natural form, bringing together disparate elements in a way that wasn’t always harmonious, but was always fascinating. Here, there were echoes of that past: the tweed jacket with the blouson back, for instance. But what Abe delivered this time was an all-in-one spirit that mulched a skirt, a top, a trenchcoat into one single piece. The apotheosis of the jumpsuit! A delicious chaos produced items like the tweed suit that looked like pieces of a pattern had been tacked on a human form. Knits erupted in a fuzz of the fibres that wove the fabric. The sinuous knit that defined one shoulder collapsed into the black silken flou that fell off the other. There was the slyest wit in the propriety of a neck-to-calf dress that was unhinged by a see-through midriff.

That has always been something that distinguishes Abe’s work. It has a wilful eroticism that you won’t find anywhere else in Japanese fashion. You need le smoking? Try the slouchy, T-shirty tux worn by Vittoria Ceretti on for size. It was looks like that which gave the collection its groove. One nation. Props.