At Thakoon, The Beginning of Something Real 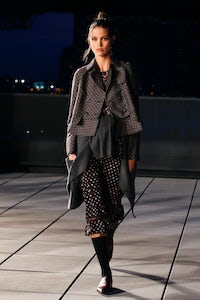 At Thakoon, The Beginning of Something Real

NEW YORK, United States — It’s been just a little over a month since Thakoon Panichgul unveiled the “designer fashion now” reboot of his brand. In this iteration, Panichgul’s collection is available through direct channels only and released in small batches every couple of weeks so that the stores — both e-commerce and the just-opened New York outpost — are constantly brimming with newness. And while Panichgul and his backers Bright Fame Fashion are just getting started, there have already been plenty of takeaways. “Having an idea is one thing,” he said. “The execution is 95 percent. It’s beyond just designing.”

That is perhaps why Panichgul’s Thursday evening runway show — which took place just after sunset on a rooftop in DUMBO — felt like such an important step in the process. The challenge here was to present the collection in such a way that it still felt interesting and undiluted to the trade, but at the same time tangible and desirable to the consumer, as 23 out of 31 looks were available to purchase immediately. This was Panichgul’s opportunity to declare what he believes Thakoon, the brand, stands for.

The collection, a wonderfully layered-up mix of chunky ribbed knits, cropped trench coats and Chantilly lace and floral silk georgette underpinnings, culled its energy from the look of the supermodel era as captured by Peter Lindbergh. ”Bringing back the glamour... but mixing that with the clothes I love to do,” he said. “It’s the push and pull of masculinity and femininity.”

To be sure, these waffle knit Henley’s, spiralling-ruffle pencil skirts and handkerchief-hem dresses were not concepts to behold, but instead, items to buy. But even with the heavy merchandising, Panichgul managed to challenge consumers — as well as industry insiders — with thoughtful, cool pieces, like a caped-back buffalo-plaid, check jacket fused together with shearling bomber.

There was an intelligence to the clothes that will make a certain kind of woman feel like Panichgul “gets” her, and that’s exactly what this endeavour is about. Was it a brand-defining moment? Maybe not quite. But it was the beginning of something real.