At the London Men's Shows, Protection and Escape from Darkness

The LC:M shows give early warning signs of the shape of the Autumn/Winter 2016 season.

At the London Men's Shows, Protection and Escape from Darkness

The LC:M shows give early warning signs of the shape of the Autumn/Winter 2016 season.

LONDON, United Kingdom — The unwieldily titled London Collections: Men is the first stop on the two-month fashion-hejira that takes in the shows for Autumn/Winter 2016, so it’s seems logical to look for early warning signs of the shape of the season. Even given the fact that London tends to defy definition, there are already several distinct subtexts.

Fashion reflects. It responds to its environment. Check the headlines, there’s darkness at the edge of town, and protection against that darkness is critical.

Fashion reflects. It responds to its environment. Check the headlines, there’s darkness at the edge of town, and protection against that darkness is critical. There’s been so much padding, quilting and camouflage in London. Christopher Raeburn showed the most topical — hooded jackets in Schneetarn, shredded snow-camo repurposed from the Cold War, which could well kick off again some time soon. He also used a raindrop camouflage for jackets and pants, which looked so right now that it made you wonder what directives the people who designed the original pattern were given. 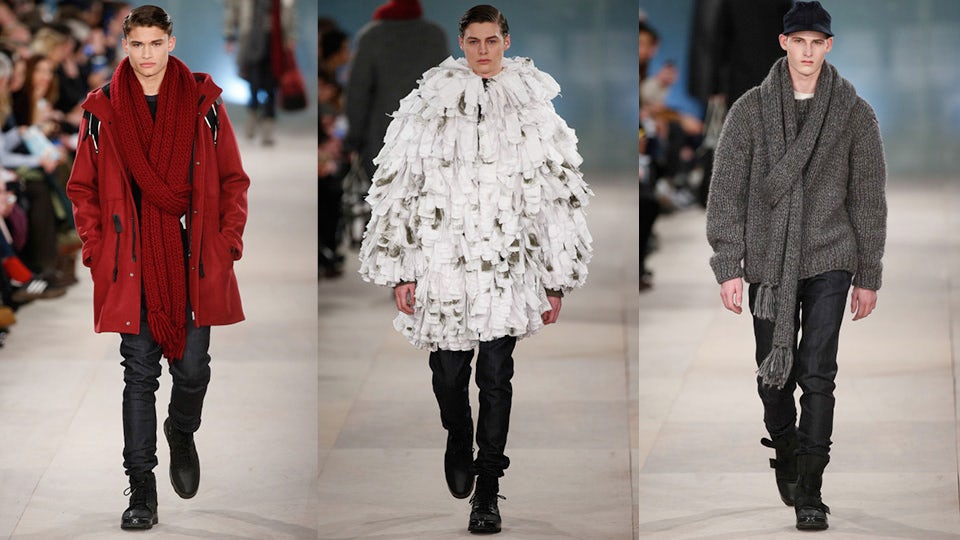 But Raeburn’s aesthetic has always been informed by the stuff he found in army surplus dumps around the world. More telling was the military inspiration in Agi & Sam’s collection. The clothes they made their rep with had a colourful cartoon cuteness. Maturity is desirable, but did it have to take such a flat, drab form? Their soundtrack began with the hesitant delicacy of Sufjan Stevens’ Vesuvius, and ended with the strident chant of Edwin Starr’s 1970 hit War. That’s the kind of process that is popularly described as “a journey.” But it perversely took Agi & Sam somewhere as nerdy and listless as the sleeves that trailed gormlessly off their sweaters. 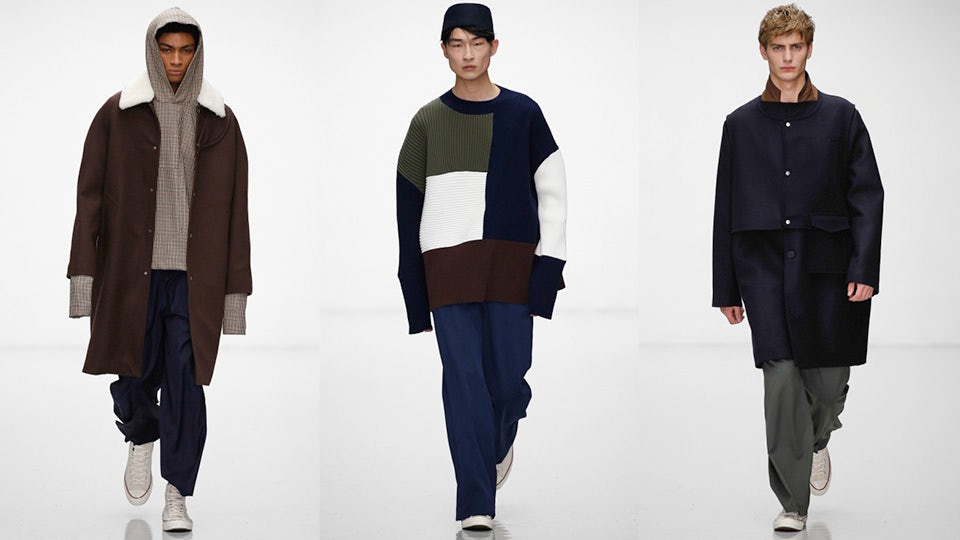 Lou Dalton drifted into the same space. She’s always had a military base at her heart. It’s been the spur for the wonderful stories she always tells about her collections. This time, for instance, there was the saga of fishermen from the Shetland Islands crossing the North Sea to rescue Norwegians from their Nazi-occupied country. Gilets like lifejackets, jersey lacquered like oilskin, a print of a fisherman’s net, Scottish tartans quilted into coats… these were the details that underscored the story, but it was all so sombre and un-Lou-like. Except for teddy-fur shearling pants that suggested the legs of a satyr. The collection needed that horniness. 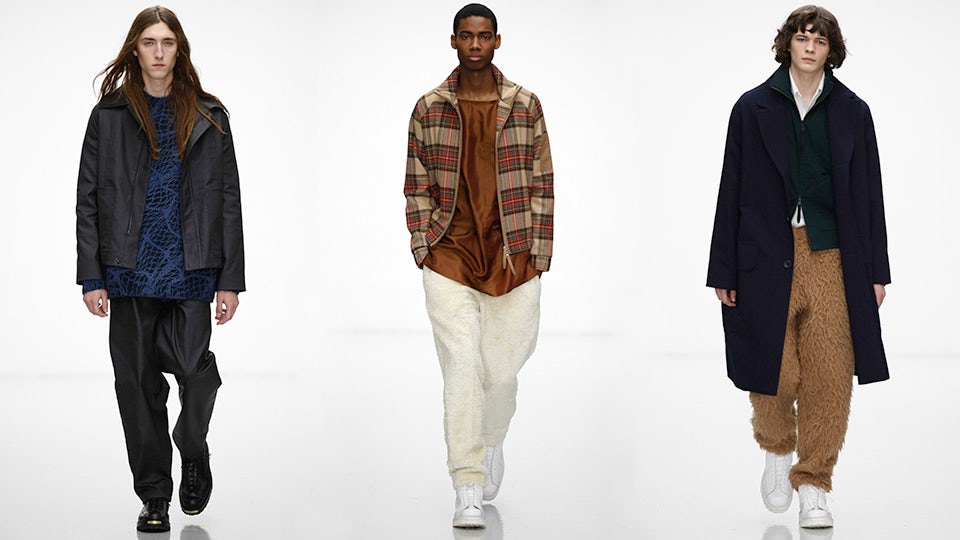 In a perverse way, that works. Dalton’s collection was inspired by literal escape. Horniness represents another kind of escape, the ecstatic release of simple physicality. An effortless segue into another major subtext of LC:M. The pursuit of pleasure. Praise the Lord for Sibling. After a downbeat Saturday, Cozette McCreery and Sid Bryan shovelled a load of 1980s-art-icon Jean Michel Basquiat — with a side order of Grace Jones — onto their catwalk. Basquiat and his mentor Andy Warhol once staged a joint exhibition that was publicised as a heavyweight bout. Sibling ran with that, with towels sarong-ed around waists, champion’s medallions dangling from the waistband of Sibling boxing shorts, knit boxing gloves and punching bags. A champ’s boxing robe was all jazzed up in knitted lace or — more spectacularly — delivered in a trailing hand-knit (it took Sid two days, going nuts with knitting needles) that featured all sorts of Basquiat motifs, starting with his radiant crown. The sheer excessive joy of such a piece was McCreery and Bryan’s take-that to recent personal tragedy. Down, but never, never out. 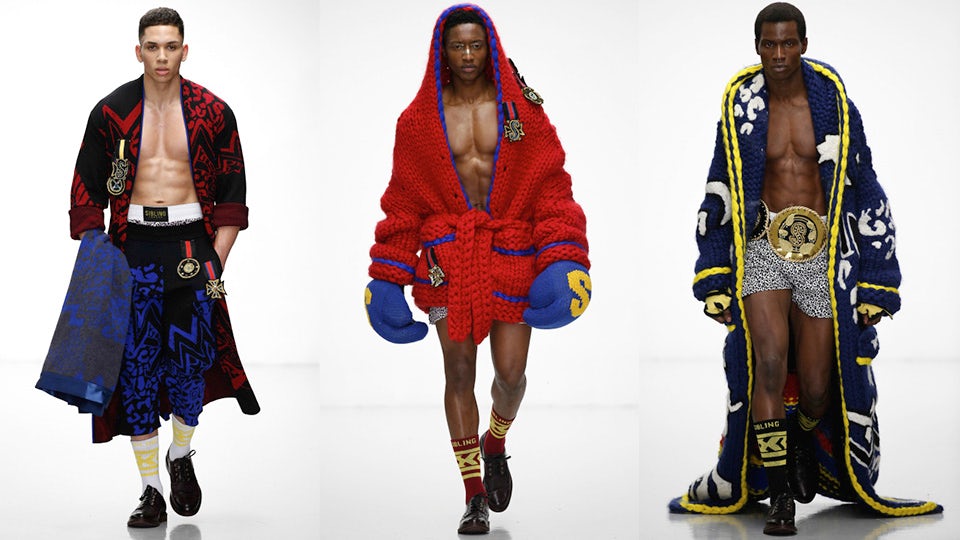 James Long had the same kind of effervescence. “It’s amazing what you can learn from local heroes,” his invitation counselled. So who the hell are his to inspire a collection that was a hallucinogenic rave/glitter/bovver fest. The navy shearling touched on the outerwear conventions seen on other catwalks. Its sequinned underpinnings were anything but. Long designs recognisable sportswear — tracksuits, bomber jackets, jean jackets — but delivers them in lurid fabrications. His athleticwear is for people who’ve never seen the inside of a gym. Which is soft-white-underbelly London in a sparkly nutshell. 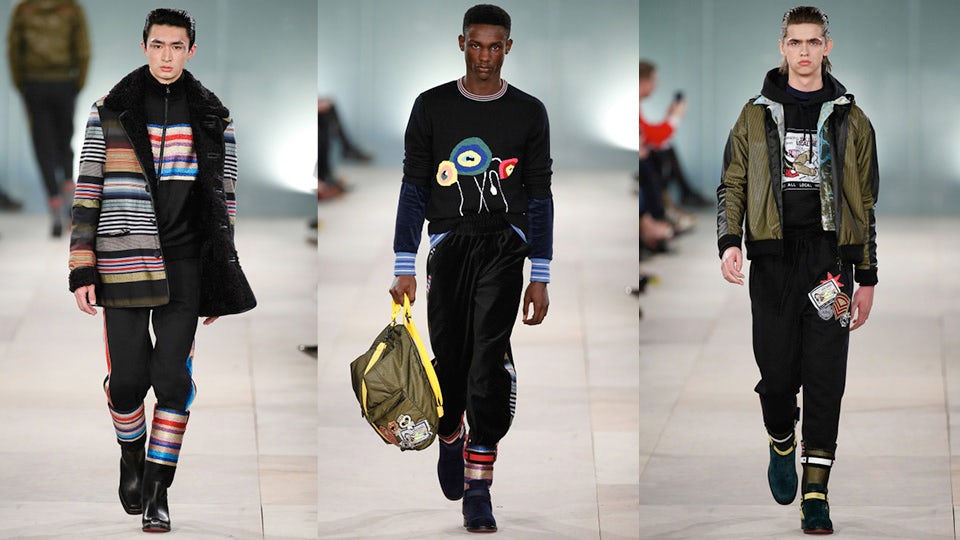 But then there are the outriders, the ones who don’t fit, the keepers of a fire that flickers with its own idiosyncratic flame. Christopher Shannon called his collection "The Comfort and the Terror." He loves the suburban security of his Liverpool roots, but when he’s there, he suffers the full suburban relapse. “The quiet creeps me out,” he admitted on Saturday night while he fielded all comers to his installation at the Alison Jacques Gallery. The presentation was Shannon’s thumbs-down to the catwalk. “It’s the ultimate luxury, to design without thinking of the imposed dramatic narrative of a show,” he said. So we could stand inches from his fluoro-vinyl jackets and micro-shorts and appreciate their sunny Wham-like optimism. 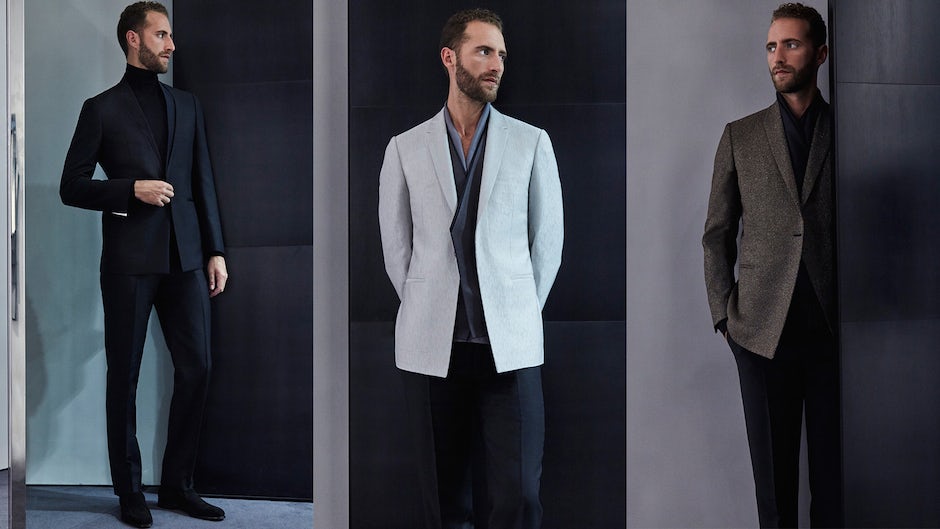 Carlo Brandelli is an altogether different proposition. As creative director of Kilgour, he has reshaped a bastion of Savile Row tradition as a vision of a sartorial future. One new jacket has recessed lapels and pockets. It is so different but so immediately, seductively chic that you can see why other businesses on the Row might be dubious. After all, who wants the new bespoke customer questioning the time-honoured verities of Savile Row tailoring? Brandelli is making them do it with his collarless jackets and coats, his artfully re-adjusted proportions, his fabrics that incorporate the latest technology while honouring the human need for the sensual experience.

What more can I say? It’s London, baby.