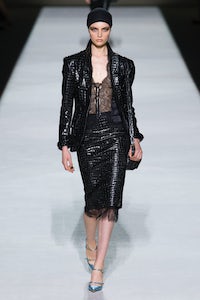 NEW YORK, United States — It’s wilful to critique a fashion show by its soundtrack – until it isn’t.

If Tom Ford was trying to tell us something on Wednesday night, the message was more in the music than the clothes, which were, as far as they went, vintage Ford, dusted with echoes of collections past, a little of his Gucci, a little of his YSL, a lot of himself in full decadent cry.

God, how he must hate that word, dredged up whenever some hack — i.e. me — wants to translate his heavy-lidded, moist-lipped, innuendo-laden shtick into tabloidese. But, oh how Ford courts it! (His latest perfume is named Lost Cherry.)

The music was a veritable story in song, seductive in its narrative groove. More so, unfortunately, than the clothes, where the narrative was more rut than groove.

Hard and soft, restraint and release… these dialogues are old friends in Ford’s fashion. Here, the strictness of a velvet corset hemmed in the loucheness of a portrait-necklined dress in fluid georgette. Joan Smalls walked in a fitted leopard jacket and bustier that topped a cascade of shivering silk threads. Mock croc made a black lacquered carapace for lace-trimmed lingerie looks. It’s an odd sensation when such effortfully sensual clothes leave you cold. Could have been the colour palette, shades of mushroom and pale lilac and the colour that paint charts call “dead salmon” (there were definite echoes of Ford’s colour scheme for YSL).

But the explanation for that paradox may equally lie in the men’s clothes that Ford showed alongside the women’s collection. They were more straightforward (razor-sharp tailoring tends to have that effect) but there was one look – all black, with a trench and dark glasses – that was almost laughably secret agent, and that got me thinking about Ford’s relationship with Bond (the Daniel Craig incarnation). And that made me think about the women in Bond movies, not the obvious biddable minxes, but assassin Elsa Klebb with her poison-tipped heels and the volatile gypsy women in “From Russia With Love”.

Ford’s models wore equally lethal-looking shoes and their heads were wrapped in gypsy scarves. In Bond’s world, you couldn’t trust a soul. You wouldn’t trust Ford’s men and women either. They looked dressed to deter, rather than seduce. It’s a novel concept for fashion, but it's one which would work much better as a twisty movie idea.

In Ford’s shownote musings, he observed that “fashion has somehow lost its way a bit”. Maybe getting lost wouldn't be such a bad thing for him. He's clearly much too familiar with his current terrain. A degree of ennui has set in.