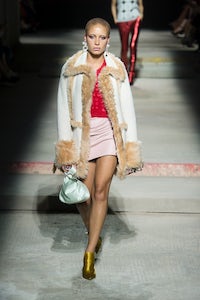 LONDON, United Kingdom — The Topshop show was always a big draw for A-list models and celebrities. But this season, the British high street brand made some dramatic changes to its fashion week strategy, doing away with Topshop Unique and re-branding its show Topshop London Fashion Week. The move came with a much younger aesthetic (silk track tops, denim jackets, bra tops and mini skirts) and the prices of the product that appeared on the catwalk were much lower than before, averaging just £80. It’s part of a move to make Topshop's fashion week presence more consumer-facing, with an emphasis on "see now buy now."

Kate Moss and her 14-year-old daughter were there, sat next to Sir Philip Green. They hung out backstage after the show to get snaps with Hailey Baldwin and Adwoa Aboah. Moss was once the epitome of Topshop when the brand was at the height of its coolness, exporting a certain British style to the world. But now it's Moss’ daughter who more closely matches the demographic that Topshop is hoping to attract. It doesn’t help that creative director Kate Phelan, who has worked on the show for years (including this season) is imminently leaving the business — perhaps a sign that Topshop's London Fashion Week show may be becoming less of a priority for the label.

Ultimately, today's show wasn’t really about clothes; it was about the casting. The front row was packed with a line of well-known actresses, celebrity offspring and influencers. The show itself featured everyone from Arizona, Lili, Damaris, Lineisy and Nora walking down the catwalk, and the effect was a powerful statement of intent. If there was ever a need for confirmation, it could be found in the denim outfits that closed the show, each of which was worn over a t-shirt with the models’ names emblazoned front and centre.