Smart in Every Sense

Ceding control in subtle ways might be the designer’s major achievement over the past decade. 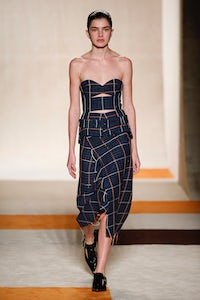 Smart in Every Sense

Ceding control in subtle ways might be the designer’s major achievement over the past decade.

NEW YORK, United States — Intelligence, like wit, is a tricky quality to attach to clothing. How can a piece of cloth be smart or amusing? And yet there are times when you see something and your immediate go-to is “intelligent” or “witty”, even if you feel neither for saying so. But Victoria Beckham’s new collection was smart in every sense of the word. Experience is the best teacher, and Beckham’s decision to revisit the ten signature dresses she started out with was clever, because it was such a straightforward way to show how far she’s come. For instance, she deboned the original corseting to soften one silhouette. She dropped waists, ballooned skirts to create another. There was the confidence of experience in artisanal detailing, like the waxed cording that was topstitched on houndstooth and allowed to trail as a detail.

There was also confidence in Beckham’s relaxed approach to tailoring. Once it was tight and controlled. Significantly, the stars of this collection were the clutch coats. In fact, ceding control in subtle ways to a new ease might be the designer’s major achievement over the past decade. Wrap a ribbed knit sweater and leggings in a gorgeous checked coat (a fringed hem for some fashion interest), slip on a pair of flats (pointed, fashion interest again) and you’ve got yourself a look that was smart and smart. Beckham could even justify the bared shoulders that have settled in as an odd trend for next season. Layer something over them — a knit, a jacket or coat — and then it’s all about what’s going on underneath. And only you know. 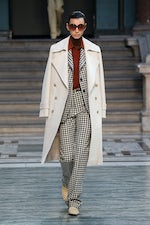 Playing Out Contrasts at Victoria Beckham 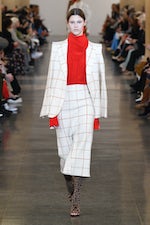 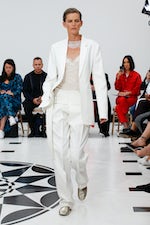 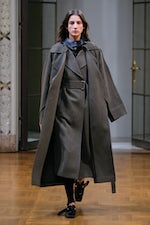