Back Home at Cavalli

Peter Dundas is back in his Cavalli nest. There were a few hiccups with the re-entry, but now he’s found his stride. 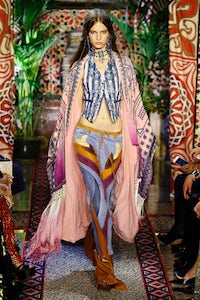 Back Home at Cavalli

Peter Dundas is back in his Cavalli nest. There were a few hiccups with the re-entry, but now he’s found his stride.

MILAN, Italy — Whoever said you can’t go home again never met Peter Dundas. He spent the first flush of his Dundashood at Roberto Cavalli in the early Noughties, expanding on Roberto’s rock gypsy prototype. Those were glory days that surrendered all too soon to a diffuse decade as hired gun. But, by 2015, Dundas was back in the Cavalli nest. There were a few hiccups with the re-entry, but now he’s found his stride, the people who were once at his side there again to help hone his vision.

And what a particular vision it is. Dundas dreams of all The Girlfriends  — the Cindy Langs, the Anita Pallenbergs, the Bebe Buells — whose leggy, velvet-ed loveliness decorated the craggy genius of their rock star boyfriends. Their attitude to dress — a little bit of ethnic this, a little bit of vintage that, a visit to an auction house, a private order from a favourite artisan in Laurel Canyon — created a template that haunts fashion to this day. (The legendary Mr Nudie made The Boyfriends their suits, and his spirit was reanimated for the menswear on the Cavalli catwalk.)

Any helicopter landing at any rock festival in the late 1960s or early 1970s would disgorge the glamorous nomads, the lawless sensualists that Dundas had in mind with the collection he showed on Wednesday night.

Of course, he touched the inspiration, enriching it, elaborating on it with a scenario that travelled from Elvis to Egypt to Japan to Janis. And “elaborate” is truly the key word there. The show — the set, the sound, the performers — was spectacular, but it pulsated in an escapist fever dream that was scarcely of this world.

Nothing wrong with that — who wouldn’t want to get away from it all for the few heady minutes of escape Dundas offered? — except that it was hard to see what could possibly come next, for a gown like the sheer column laden with beaded Amerindian motifs, or a skirt like the gilded, tiered hipslung floorsweeper, or the crystallised cape with the eagle motif. It was a gorgeous fantasy, but who now has the money — or the inclination — to buy into such a thing?

Preferable to take on board that this was a fashion show, a Big Statement, so step back and isolate individual items (probably budget-busters nonetheless) that you could imagine enhancing the style of an individual who was already favourably inclined to the aesthetic of the glamorous magpie. A piano shawl? Beaded velvet flares? An embroidered cotton shirt? A rabbit-trimmed waistcoat? A choker? A belt? It could almost be you living the Dundas dream.