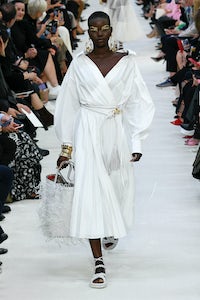 PARIS, France — Pierpaolo Piccioli is messianic about haute couture. By anyone’s reckoning, he’s not doing badly as a fashion messiah. He's racked up some bona fide triumphs with his last few couture outings. Along the way, he’s come to an interesting conclusion. “I’m not sure the new generation cares about how many stitches there are in a dress, how many ruffles, how many hours of work. They’re more fascinated by the boldness of couture, the freedom to express yourself.” The experience of couture, in other words, more than the craft. Piccioli is fine with that. His enthusiasm for couture’s extravagance never wilts, and with his Spring 2020 collection, he found a way to insinuate it into ready-to-wear.

His launchpad was grisaille, a rigorous painting technique which considers colour a distraction, relying on monochrome – grey and white – to reveal the essence of a subject. Piccioli thought that was a smart way to emphasise the shapes and volumes that are the essence of couture. (Cristobal Balenciaga pursued the same goal with monochrome black.)

He started with a plain white cotton shirt and took it on at least twenty flights of fancy, from a relatively simple wrap dress to rah-rah shorts wrapped in white ostrich feathers to a gorgeous ruffled apron dress. Such ingenuity would usually be the province of couture. “But it’s not how expensive it is,” Piccioli reasoned. “It’s about the care you put into it. It’s about the talent of the cutter, and making extraordinary something that is ordinary.”

And having established that as a manifesto, he really went to town as he steadily built up colour, pattern and print, like he was painting a fresco. Rousseau’s jungle juiced by Gauguin’s spontaneity and Matisse’s colours made a heady mix, but Piccioli kept in mind the simplicity of his original proposition. It’s become a signature: the gracefully fluid floorsweeper turned into a canvas for his exquisite colour sense. Still, it was testament to his skill that one of the most striking pieces wasn’t even one of those flora and fauna specials. Lineisy Montrero wore a trench coat artfully reconfigured as a dress in organza with all the technique but not a whit of heaviness.

The straightforwardness of that piece underscored Piccioli’s success in achieving his stated goal of making the ordinary extraordinary – or simply elevating the familiar. Like a suit with Bermuda shorts, or a cropped leather jacket with billowing bishop’s sleeves. True, the show could have done with a bit of an edit but Piccioli maintained an effective rhythm, allowing a breathing space, a little black dress, say, before cranking up the colour again. He crescendo-ed with fluoro pink and searing orange gowns, before dropping back into white for his finale, and one last froth of organdie, wreathing a body of point d'esprit. Back to the essence.