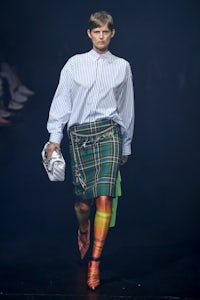 PARIS, France — Demna Gvasalia is like a sociologist who treats fashion as a case history. How do the bourgeoisie dress here? What is street culture like there? What happens if I fuse them together?

Gvasalia’s new collection for Balenciaga provided at least one, typically left-field answer: PLATFORM CROCS! The most banal footwear in the world, transformed by fashion into one of Spring 2018’s benchmark items. “It’s new, it’s light, it’s one piece of moulded foam,” Gvasalia rhapsodised, with an implied “What more could you want?”

You could want — and even expect — more of the Balenciaga that Gvasalia has been reconstructing since his Autumn/Winter 2016 debut at the label, with its artful integration of respect and subversion. But he’s had enough of homage. “I wanted more Demna in this,” he declared. “The things that I like and value. This is my direction.” Inevitably, it took him back to his own label, Vetements, an earlier sociological exercise whose impact still reverberates within the industry. “Fashion is a communication tool,” said Gvasalia. What Vetements communicated was fashion’s ability to alchemise the banal, to make a Titanic sweat, a DHL shirt objects of transcendent desire. CROCS!

With this new collection, Gvasalia took one of Balenciaga’s iconic strengths – silhouette – and alchemised the sublime. He attached two items of clothing together at the neckline in such a way that either of them could be worn to the fore: leather jacket and waistcoat; trench and bomber; bed jacket and biker vest and on through seemingly random combinations of pieces sitting together in configurations that often looked klutzy. Balenciaga’s monumental shapes were rendered domestic and banal, which was definitely one way to steer the brand back towards Demnaville.

There were others: the exaggerated proportions, the dressed-in-the-dark combinations of clothing, the resolute ordinariness. Waists were slung with touristy trinkets, short-sleeved shirts cut from what looked like hefty bags, handbags still covered with their protective cloths (like every mum who carefully preserved anything smart, from dinner plates to perfume, “for best”). There was a newspaper print that was really “fake” news, but with happy pictures. There were also prints with dollar bills and euros.

The money prints made me think about something another designer said to me earlier this week when we were talking about designers and artists. He suggested Gvasalia is fashion’s Warhol. If the artist compelled a radical new take on the same old shit, he was also driven to create by the oldest terrors in the good book – darkness, death, oblivion. The same awareness underpins Gvasalia’s social experiment. Sunday’s presentation was supposed to be in the street, until the gendarmes put their feet down. It was quickly reconceptualised as a show staged in darkness, with follow spots, soundtracked by throbbing, ominous music. “Dangerous, like something’s going to happen,” said Gvasalia. “It represents the time we live in. And fashion has to do that.”