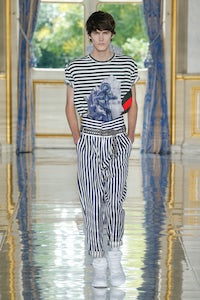 PARIS, France — Sparkle. Sparkle everywhere. This was the focal point at the Balmain show today, from the gloriously wrought set at the Ministry of Foreign Affairs, rendered even more sparkly thanks to mirrored flooring, to the glitzy clothing, including catchy variations on the glittery socks and gloves favored by the late Michael Jackson. The collection was actually a Michael Jackson tribute — the soundtrack came as a bonus — captured in a look composed of embellished jacket or jumper, stovepipe jeans, white socks and loafers.

It made for a fresh, energetic evolution of Balmain menswear codes, which finally moved on from the sexy militarism of the past to embrace sailor stripes, college motifs and colour. (The black, slightly gothic finale should have really been edited away, as it felt a bit like a blast from the past).

The overall message was one of inclusion and a brotherhood of all skin colours. It's a topic the mixed-race Olivier Rousteing feels deeply about and has been exploring since his first day at Balmain, way before others. There is an authenticity to what Rousteing does that cannot be imitated. This was one of his most accomplished shows so far.