Olivier Rousteing tweaked his formula for the better, embracing sensuality with a mature hand while losing none of the va-va-voom which made him a name. 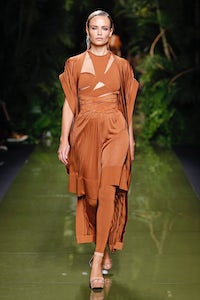 Olivier Rousteing tweaked his formula for the better, embracing sensuality with a mature hand while losing none of the va-va-voom which made him a name.

PARIS, France — Chirping birds. A verdant jungle canopy hanging amongst the chandeliers above a lacquered, moss-coloured runway. Was this Olivier Rousteing’s Balmain? Indeed, it was Balmain’s greener pastures, those of the now Mayhoola-owned Balmain that is. The niche Parisian house's years of cult status amongst the glitterati has paid off with new infrastructure and big expansion plans.

It’s a label breaking out of its golden shell, a metaphor that applied to the clothes that Rousteing paraded through the Hôtel Potocki for Spring/Summer 2017, their armorial cast all but replaced by athletic and fluid softness. Gone were the weighty pearl encrustations and bamboo corsetry, banished along with the pagoda shoulder that put this brand back on fashion’s map in Christophe Decarnin’s day and practically never left.

In place of those embellished exoskeletons was a collection languid with movement, opening in ensembles of luxurious jersey and lurex knits falling in pointed cape shapes and bound around the waist with soft ties or suede belts. Later, snakeskin jacquards were paired with the real thing for long trenches and more structured kimono tops, before a sparkling finale of gowns dazzling with geometric patterns of strass or draped in glo-mesh.

All through the 80-look show, the designer tweaked his formula for the better: that signature safari palette felt richer, dusted through with warm ochre and leafy greens, before Rousteing hit his stride for evening with all manner of jewel tone silk crepes from amethyst purple to a fiery carnelian orange. This was a positive evolution for the designer, who has played with the idea of flou in the past but with a lot more fluff. Here, he embraced sensuality with a mature hand while losing none of the thigh-split va-va-voom which made him a household name (who hangs out with other household names, and knows exactly how they want to dress).