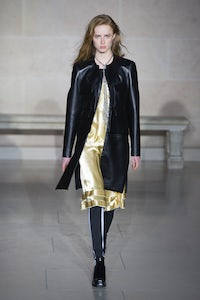 PARIS, France — Nicolas Ghesquière knows how to make a symbolic gesture. Last season’s Louis Vuitton show happened on the Place Vendome, at the very heart of Paris. This new one took place under a soaring glass dome, surrounded by huge classical statuary, in the Cour Marly, at the very heart of the Louvre, the museum which is one of the world’s most famous celebrations of civilised human achievement.

As our own times start to seem a little less civilised — the attempted machete attack at the Louvre a few weeks ago being a case in point — Vuitton’s choice of venue took on another shade. Ghesquière elaborated on that point. “With today’s focus on frontiers, fashion can show how immigration has always been very rich for the evolution of us all. Paris recognises international fashion, the Louvre welcomes many people. There are no boundaries.” And, he went on, multi-culturalism is fundamental to a company like Vuitton whose lifeblood is travel.

So he described the new collection as an expression of the way different cultures can blend. “It’s a very simple idea, fashion is there to break any frontier possible.” East, West, a bit of Africa, Russia, America, country, city, folkloric, cosmopolitan… the clothes he described sounded vivid and characterful. The clothes he showed didn’t quite turn out that way. Ghesquière’s calling card was once a dazzling precision. Maybe multi-culturalism by its nature defeats such an idea, but this collection felt scatty and blurred around the edges. He said the story was more in the fabric than the embellishments, and there was a definite commitment to clashing textures, particularly in an overlong final passage of dresses that appeared as if plucked from the closet of a futuristic saloon girl (why do I see echoes of Westworld everywhere?). Unsurprisingly, the most successful looks were the sharpest, like Mica Arganaraz’s cobalt pantsuit, with its subliminal echoes of Motocross. Now that’s travelling without frontiers.